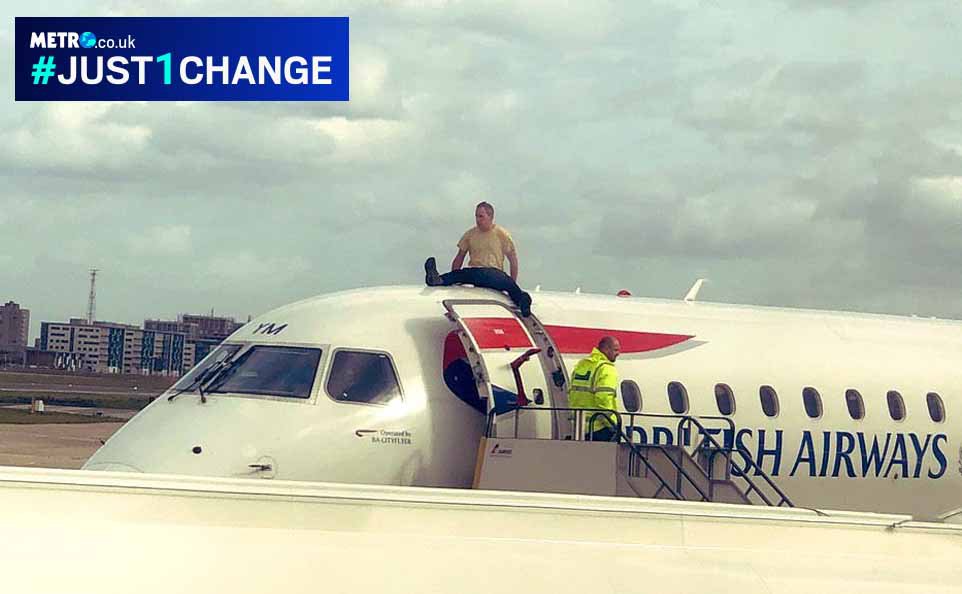 When I climbed on top of an aeroplane in October 2019 as part of Extinction Rebellion’s October Rebellion, I hadn’t planned it.

But I knew I needed to do something out of the ordinary to demand urgent action from a government negligent in the wings.

Now, almost two years later, and with the UK hosting COP26 in Glasgow – arguably the most important global summit of our lives – I am writing this from a cell in Wandsworth Prison, where I am serving a 12-month sentence for causing a public nuisance.

I am the first Extinction Rebellion protestor to serve a custodial sentence, and with the Home Secretary, Priti Patel, working hard to shut down our right to protest, I am unlikely to be the last.

This Government seems more intent on criminalising peaceful protestors raising the alarm than taking the difficult steps needed to protect people and planet.

While I serve my time, the prime minister has been neglecting his duty, taking a holiday in Spain recently with the summit only weeks away.

What message does this send to the world at a time when we need strong and courageous leadership? COP presents an opportunity for Boris Johnson to do something great, to lead the world on climate, but his actions (or lack of them) show he’s not capable or willing to take on the task.

The Government’s recent Net Zero Strategy tells a story of delusion, carbon offsetting, incremental policy change, and tech fixes not yet invented, dressed up as a shiny plan for COP26.

The reality is, their proposal still falls hugely short of the UK’s Paris commitments, with our carbon budget more in line with 2.5-3C of warming than 1.5-2C.

The world looked on in astonishment and asked, how can this be? We surprised and shocked people with our capacity to achieve the apparently unachievable, myself also gaining a double gold in New York in 1984 for cross-country skiing.

I’ve looked carefully at what motivates me and others to do what we do. For me, it’s not about winning. It’s about challenge and discovery, and to go after what is deemed to many to be impossible.

It was my wonderful daughter Alice who brought to my attention the current severity and exponential nature of the crisis we face. True to character, I resolved to play my part in tackling it to the best of my ability.

I look at Boris Johnson and wonder what motivates him. He has spent his premiership claiming the UK is leading on climate, but his words are mere smoke and mirrors subterfuge. The Oil and Gas Authority issued 113 new licences for oil and gas exploration in 2020, and will likely continue do so after a temporary hiatus for the 2020/21 period.

In January, the Government’s chief planning officer defended giving the green light to a new coal mine in Cumbria (a final decision will be made on it in the new year) and they’ve scrapped and withdrawn remaining funds (over £1bn) from the flagship ‘Green Homes Grant’ home insulation programme, after promising to ‘build back better’ after the pandemic, to name a but few. In the Chancellor’s budget last Wednesday, he slashed air passenger duty on flights by half, in a bid to increase domestic flying.

If the prime minister was to show true leadership now at COP26 with the entire world looking on, he could make himself a legend. But sadly, he won’t, because he’s not motivated by truth, fairness, courage and a love for humanity and nature in all its ferocious beauty; all values needed at this most desperate hour.

Instead, his promises are vacuous, cowardly and without substance. He must be brave enough to do the unexpected, the most obvious of such would be to stop all new investments in fossil fuel extraction, the most critical of tasks if we’re to stop making the situation worse.

What we need right now is something spectacular, and all the imagination and determination the human spirit can muster, to achieve this most difficult of tasks. If World Leaders at COP can’t do what’s necessary after 26 years, then we must look for different ways to find solutions that are independent of the corruption of mainstream politics, that empower ordinary people, and bring expert knowledge and ideas to the table.

Citizens Assemblies – whether local, national or global – alongside participative democracy, could offer this, because change will ultimately come from the people, not politicians.

To quote Greta Thunberg, that ‘change is coming whether we like it or not’. So, it is up to all of us to take a stand and be remarkable.

Because the time for talking is over; the time to act is now.