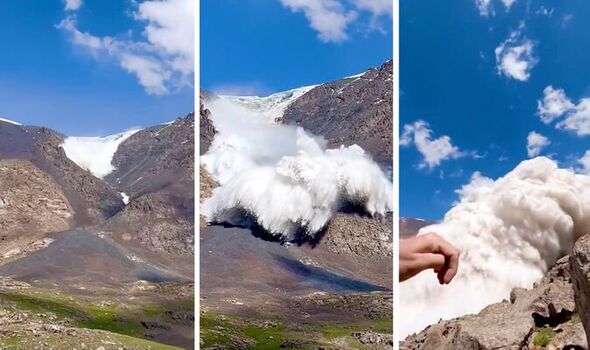 Nine fellow Britons and one American were on a guided tour with Harry Shimmin in the Tian Shan mountains in central Asia when the ice and snow suddenly started barrelling towards them. Harry, 27, a captain in the Royal Engineers, had briefly separated from the group to take photographs when he heard “the sound of deep ice cracking”. He captured incredible footage of the moment the avalanche started to fall from a distant peak and made its way towards him, gathering pace and mass, before finally he ducks behind a boulder.

The snow is then seen washing over him and engulfing his hiding place before the video, posted on Instagram, ends.

Amazing Harry survived being buried thanks to the life-saving boulder while his fellow travellers, who were further away, were also unscathed.

He said: “From where I was filming, I could only run away from the shelter next to me, hence why I didn’t move. I’m not averse to risk, so I was prepared to move at the last minute for the sake of some good footage, much to the displeasure of my more risk averse — or more sensible — brother.

“It might be hard to believe, but I was convinced the main bulk of the avalanche wouldn’t reach me and I would only be it by a snow ‘cloud’, rather than a ‘wall’ of snow. I’m a qualified ski instructor and have received avalanche training on the course . . . none of that even remotely helped.

“When I was head-down getting covered in snow I thought this is it, I’m going to die here on my own.”

He said he only survived by “good fortune”.

Harry graduated with an MA from the University of Chester in 2018, and alongside his army career completed a ski instructor course earlier this year.

He wrote on Instagram that he knew the other group members were further from the avalanche so they wouldn’t come to any harm.

The survivor admitted he felt “giddy” when he realised that he had survived.

“When the snow started coming over and it got dark and harder to breath.

“Behind the rock it was like being inside a blizzard but once it was over the adrenaline rush hit me hard,” he added

Stretching for about 1,500 miles, the Tian Shan mountains sit mainly in south eastern Kyrgyzstan and its northeastern border with China. They formed part of the ancient Silk Road trading route from Asia and the Middle East to the west.

Harry, who went to school on the Isle of Man, said: “The whole group was laughing and crying, happy to be alive (including the girl who cut her knee). It was only later we realised just how lucky we’d been. If we had walked five minutes further on our trek, we would all be dead.

“If you look carefully in the video, you can see the faint grey trail winding through the grass. That was the path.”

Sadyr Zhaparov, who has been president of Kyrgyzstan since January last year, has revealed that the impact of climate change on nations in mountainous countries is too often not considered fully by the international community.

“The world is facing global climate change, which is fraught with dangerous consequences,” he said. “This is especially true for us mountain countries because these problems are more dynamic and specific: glaciers melting and natural water reserves decreasing, which can lead to imminent disaster.

“Kyrgyzstan is home for almost 10,000 glaciers. Over the last 20 years, we are witnessing an irreversible melting of those century old glaciers that is leading to gradual shrinking of water resources.”