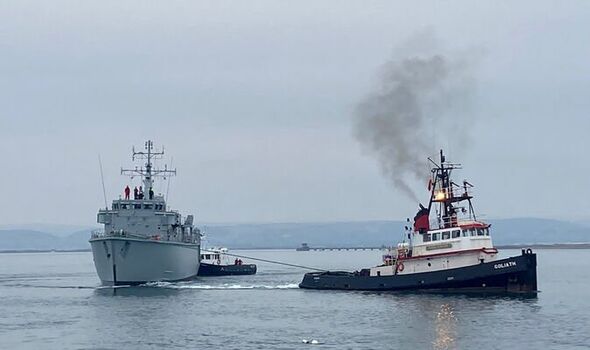 HMS Quorn, a 750-tonne vessel with a length of 60m, sailed into Appledore Shipyard on the Taw Estuary at 6am, and awaits renovation of its sonar systems, engines, electrical systems and accommodation. The former Navy vessel, which served for 27 years before it was sold to Lithuania in April 2020, will be completely renovated and restored at the shipyard, which was awarded the contract in July on behalf of the Lithuanian Government.

Shipyard owners Harland and Wolff says it is delighted to showcase its “technical and commercial capabilities”.

Its shipyard was on the verge of closure in 2019, Devon Live reports.

CEO of Harland & Wollf, John Wood, said: “The extended process to win the M55 Contract enabled us to showcase the technical and commercial capabilities of the entire group and has now provided the MOD with a credible alternative to the existing industry base.

“This contract is validation that the Government can go elsewhere, recognising the investment and progress made over the last two years to put Harland & Wolff in a position to execute on such programmes. Our eyes are now set on delivering this contract and executing on our pipeline as we continue to build momentum, credibility and a high-performing, experienced workforce.

“Finally, I wish to thank the MOD for the faith that they have placed in Harland & Wolff, and I look forward to working closely with them on the successful delivery of this contract.”

The shipyard now aims to support more than 100 jobs as part of the government’s National Shipbuilding Strategy Refresh.

The Hunt-Class vessel specialises in active mine-hunting and use high-definition sonar to detect and dispose of sea mines.

Since then, it has been presented with the Freedom of the Borough scroll in Melton Mowbray, Leicestershire, and was deployed to the Persian Gulf as part of the Royal Navy’s permanent presence in the region.