MARSEILLE, France — The red-helmeted marine firefighter was firm. “Right,” he told the anxious families gathered around him, “we’re closing up the building.”

Bewildered and frightened, they climbed the darkened, rickety staircase of their building on the Rue Jean Roque, past the chunks of missing plaster and thick lines of cracks, some big enough to put an arm into. On the firefighter’s orders, they gathered their belongings and then left, for the last time.

Nervous officials have since evacuated 1,054 people, and counting, from 111 crumbling apartments in the heart of the ancient and dingy Mediterranean port. But a 2015 report written for France’s minister of housing found that 40,000 dwellings in Marseille were unsafe — which is 10 percent of all unsafe buildings in France, and affects 100,000 of the city’s inhabitants.

Marseille, France’s second-largest city and one of Europe’s poorest, is facing a housing crisis that, more deeply, is a crisis of poverty. More than a quarter of the population is officially poor.

Many are asking why it has taken officials so long to address the dire conditions and what Marseille’s persistent poverty says about the neglect of “the other France” — in part immigrant and poor — whose decline long preceded President Emmanuel Macron’s pro-market changes, and easily threatens to outlast them. 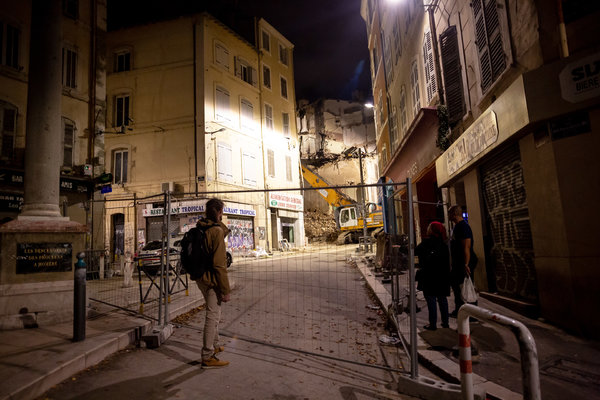 As the city has poured millions into sports facilities and dazzling museums for tourists, little has gone to shore up the hundreds of buildings in the city center, some dating to the 18th century and earlier, which house the poor. Inspections have been haphazard and cursory, alarming reports have been ignored and official efforts understaffed.

Despite the 2015 report’s determination that 40,000 buildings were unsafe, only a tiny fraction were officially declared unsafe by the city in all of 2016, according to an activist group.

On Oct. 18, two and a half weeks before the buildings collapsed on the Rue d’Aubagne, an expert sent by the city declared the first floor of No. 65 unsafe. Not the rest of the building, though.

Those who were killed — including an immigrant mother of eight, a student, a painter and an out-of-work African migrant with no papers — reflected the gap between those who have housing, clean water, education and job opportunities, and the rest, even in a country with an extensive social safety net.

In response, thousands of people have poured into the city’s streets to protest the authorities’ perceived negligence.

“Gaudin, Murderer!” they shouted last Wednesday night, referring to the city’s powerful longtime mayor, Jean-Claude Gaudin. “The street’s justice will condemn you!” they yelled, 10,000 strong in a noisy march on the Baroque City Hall building facing the water.

“There is no particular fault for which we reproach ourselves,” Mr. Gaudin told the local news media after one of the marches. But the response of city officials has been sparing.

The people of Marseille, both the smartly dressed and the ragged, have trooped day after day to the makeshift memorial of flowers and candles erected near the disaster site. “It wasn’t the rain!” — an ironic reference to City Hall’s initial explanation, and already an icon of the protest — was scribbled on the wall.

“Who died there?” said Rabah Ramdani, a shopkeeper who had come to pay tribute. “Only the poor. And it isn’t over.”

Down long and narrow Rue Jean Roque, shady in the autumn sunshine, Bintou Cissé stood outside her tiny alterations shop around the corner from the collapsed buildings, refusing to go inside.

“Because I’m afraid,” she said. “Everything is rotten here. It’s nothing but slums.”

“You can see it,” she added, looking up at the facade’s cracks.

In the dilapidated old buildings of the Noailles neighborhood in the city center, where the poor live, fear has taken over. Children say they are afraid to come home from school, working mothers say they wake at night at the slightest vibration, university students sleep somewhere else.

“Up until now we’ve been ashamed to bring people here,” said Laura Spica, a musician who lives on the street. “Now, we’re not only ashamed, we’re afraid.”

Dazzling and pastel-hued, Marseille is a concentration of France’s postindustrial urban pathologies — “a sort of French Detroit,” said the sociologist Michel Peraldi.

It has never recovered from the double blows of deindustrialization and decolonization, Mr. Peraldi said. The industries that transformed cheap raw materials no longer exist, and neither do the once closely linked colonies that supplied them. The biggest contemporary employer is the public hospital administration.

Unemployment is nearly 50 percent higher than the national average. Immigrants have come in waves since the 1950s from North Africa.

“There are three generations of unemployed,” Mr. Peraldi said. “There has never been any clear policy to reintegrate these classes into society.”

Of the two buildings that fell on the Rue d’Aubagne, No. 63 was vacant, boarded up and missing much of its roof, and had been taken over by the city. It is thought that the collapse of that structure, feebly supporting the already weakened and inhabited No. 65, brought down No. 65, like a house of cards.

“What this has revealed is a state of total decadence, and a total insouciance on the part of the elected officials,” said Patrick Lacoste, head of an activist group, Center-City for Everybody.

“This is a political catastrophe,” Mr. Lacoste added, “because for 23 years City Hall has let the neighborhood die.”

Enter any building, at random, in the Noailles neighborhood and the staircases tilt queasily downward. It is advisable to hold the handrail.

“When the neighbor goes up the stairs, the whole place shakes,” said Khedidja Dhamani, a middle-aged woman who lives on the Rue d’Aubagne down the street from the collapsed buildings.

Ceilings are missing expanses of plaster, and old wooden beams are often exposed and rotten. In Ms. Dhamani’s kitchen, water from the neighbor’s bath streamed through a large crack.

Elsewhere in Noailles, fabled for generations as a food-shopping district, it is common to see rusty steel girders propping up staircases. Stephanie Rose, a young mother of two, tells her children to wear tennis shoes when it rains; the water comes right into the apartment.

Nearby on the Rue de l’Arc, Saida Ouaheb’s downstairs neighbor asks her not to use her washing machine, because it makes the ceiling shake. Ms. Ouaheb’s three young daughters are now scared to be in their small two-bedroom apartment. Her 9-year-old refused to leave school one day this week.

“We’re not sleeping well here,” said Ms. Ouaheb, who works as a cleaner in a restaurant and whose monthly rent of 640 euros, or about $730, is heavily subsidized by the state.

Her Moroccan husband speaks no French, doesn’t have the right papers, and doesn’t work. “Since Monday I am afraid,” she said. “I would like to leave.”

At the week’s protest marches, immigrants who live in the downtown slums were largely outnumbered by white, bourgeois residents of Marseille, mostly unaffected by the grim housing conditions. Many nonetheless expressed shame over the deadly disaster.

“It’s incredible that something like this could have happened, here, in France,” said Elise Sut, a musician who joined one march.