LONDON — On the night of March 26, 2020, as the coronavirus was engulfing Britain and its leaders were struggling to fashion a response, Prime Minister Boris Johnson ridiculed his government’s health secretary, with a profanity, as totally “hopeless,” according to a text message posted by his former chief adviser.

The WhatsApp message, one of several texts shared on Wednesday by Mr. Johnson’s former aide, Dominic Cummings, reignited a debate over how Britain handled the early days of the pandemic — a period when Mr. Cummings said it lurched from one course to another and failed to set up an effective test-and-trace program.

In riveting testimony before Parliament last month, Mr. Cummings pinned much of the blame for the disarray on the health secretary, Matt Hancock, whom he accused of rank incompetence and serial lying. Mr. Hancock denied the accusations before lawmakers last week. He said it was “telling” that Mr. Cummings had not provided evidence to back up his most incendiary claims.

The WhatsApp messages, and an accompanying 7,000-word blog post, are the former aide’s attempt to do so. They depict a government under relentless stress, racing to secure ventilators and protective gear, scale up a testing program, and settle on the right strategy to prevent the nation’s hospitals from collapsing. 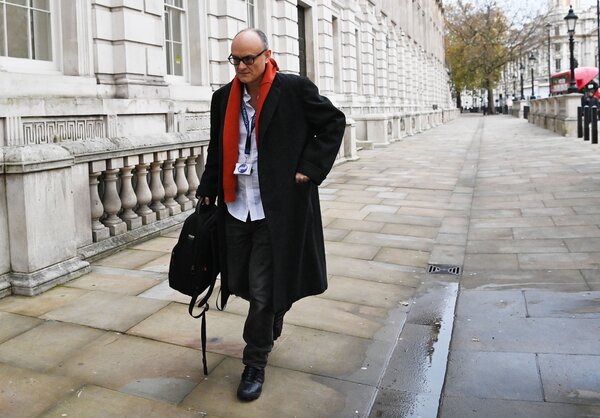 In the text exchange with Mr. Johnson on March 26, Mr. Cummings noted that the United States went from testing 2,200 people a day to 100,000 in two weeks. He said Mr. Hancock was “skeptical” about being able to test even 10,000 a day, despite having promised two days earlier to reach that goal within a few days.

The exchange prompted Mr. Johnson’s profane description of Mr. Hancock, which he followed with a series of post-midnight calls to Mr. Cummings that the aide did not pick up. Mr. Cummings said Mr. Johnson was trying to contact him to tell him that he himself had just tested positive for the virus.

That set off a tumultuous period in which Mr. Johnson became severely ill with Covid-19, ending up in an intensive care unit, while his government struggled to contain a virus that was exploding across the country. In one way, Mr. Cummings said, the situation improved: Mr. Johnson deputized his foreign secretary, Dominic Raab, to chair meetings in his absence, and Mr. Raab did a better job of it.

Mr. Cummings is hardly an unbiased observer. He and Mr. Johnson had a bitter falling-out a year after Mr. Cummings masterminded the election campaign that gave Mr. Johnson’s Conservative Party an 80-seat majority in Parliament. Mr. Johnson fired him last November, and the aide has lately been waging a kind of guerrilla insurgency against his former boss on social media.

Public support for Mr. Johnson has remained strong as Britain recovered from its shaky start to deploy vaccines rapidly. Mr. Cummings, for his part, has been in disrepute since last year when reports surfaced that he had violated lockdown rules to travel 260 miles to his parents’ house in the North of England.

The screenshots of WhatsApp texts offer only a fragmentary account of what happened in 10 Downing Street during that period. Mr. Hancock claimed that there was never a nationwide shortage of protective equipment, that the testing system eventually worked, and that everyone who needed treatment for Covid-19 got it.

In his testimony, Mr. Hancock said he did not know why Mr. Cummings bore such an animus against him. He said he was aware that Mr. Cummings was agitating to get him fired. But he insisted Mr. Johnson had never wavered in his support and pointed out that it was Mr. Cummings who lost his job.

“The best thing to say about this, and this will be corroborated by lots of people in government, is that the government has operated better over the past six months,” Mr. Hancock told a Parliamentary committee.

Still, Mr. Cummings was at the heart of the Covid response and his WhatsApp texts with Mr. Johnson are a real-time glimpse into how the government dealt with it. He accused Mr. Hancock of rewriting history, noting that Britain initially abandoned community testing before reinstating it with Mr. Hancock’s much-trumpeted target of 100,000 tests a day by the end of April 2020.

Devi Sridhar, the head of the global public health program at the University of Edinburgh, said the latest information “reinforces that testing capacity was a bottleneck, though they never admitted it publicly.” But Professor Sridhar said she doubted that a “vast majority of the British public are interested in these exchanges. They want Covid to be finished, their vaccines and life to go on.”

Indeed, the disclosures by Mr. Cummings seem largely designed to shape the narrative in advance of a Parliamentary inquiry into how the government handled the pandemic, which he predicted would not be completed before Mr. Johnson left office.

Mr. Cummings cited two other incidents that he said demonstrated Mr. Johnson’s lack of faith in his health secretary. On March 27 last year, as hospitals were filling up, Mr. Cummings texted the prime minister to say the government had turned down offers to buy ventilators because suppliers had raised their prices.

“It’s Hancock,” Mr. Johnson replied. “He has been hopeless.”

A month later, Mr. Cummings and Mr. Johnson were again trading late-night texts, this time about the shortage of face masks and other personal protective equipment in hospitals. The prime minister floated the idea of reassigning responsibility for that to another Cabinet minister, Michael Gove.

“On p.p.e. it’s a disaster,” Mr. Johnson wrote. “I can’t think of anything except taking Hancock off and putting Gove on.”