Five months after Russian forces took over the Zaporizhzhia plant, all that stands between the world and nuclear disaster are dedicated Ukrainian operators working at gunpoint.

The Zaporizhzhia Nuclear Power Plant, as seen from across the Dnipro River, is at the center of grave, and growing, concerns.Credit… David Guttenfelder for The New York Times

In the control room of Reactor No. 3, operators were horrified.

“Stop firing at the nuclear facility,” one begged over the station’s loudspeakers. “You are endangering the safety of the entire world.”

The danger at the Zaporizhzhia Nuclear Power Plant — a sprawl of cooling towers, nuclear reactors, machine rooms and radioactive waste storage sites — was actually graver than even those who worked there knew at the time.

A large caliber bullet had pierced an outer wall of Reactor No. 4 but, most worrying and not disclosed at the time, an artillery shell had struck an electrical transformer at Reactor No. 6, which was filled with flammable cooling oil, plant employees subsequently learned and told The New York Times. Both reactors were active.

“By happy coincidence, it didn’t burn,” said an engineer, Oleksiy, who insisted that his last name not be publicly disclosed out of security concerns.

Five months later, with artillery fire once again striking the plant, the specter of a possible nuclear catastrophe has gripped the world’s attention. Urgent negotiations are taking place to try to arrange a visit by experts from the International Atomic Energy Agency.

Officials from the United States, the European Union and the United Nations have called for the creation of a demilitarized zone, as Ukraine and Russia each accuse the other of preparing attacks on the plant — leading many to fear that Zaporizhzhia is in greater peril than ever.

Standing between the world and a nuclear calamity are the Ukrainian workers who know the plant intimately, having run it for years with the utmost precaution in a sleepy corner of southern Ukraine where the city and the plant had once lived in a steady and predictable symbiosis before the Russians arrived. 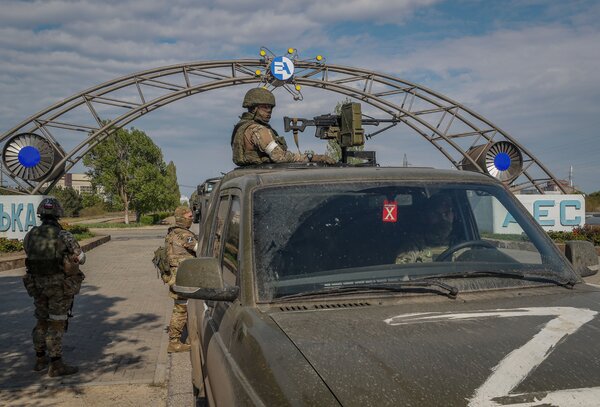 Today, under Russian occupation, the plant employees are both hostages and essential workers — Ukrainian engineers duty bound to prevent disaster while working under the watchful eye of Russian snipers.

The surrounding city where they live, Enerhodar, which translates as “the gift of energy,” is under siege. Some 100 plant workers have been detained by Russian forces, according to Ukrainian officials and residents. Ten of those are still missing.

It is up to a skeletal crew of stressed, tired and scared workers to prevent disaster.

“Imagine men and women coming to work and facing armed soldiers all around,” said Serhiy Shvets, a metalworker at the plant who was shot by Russian soldiers at his home in May. They had searched videos of people who protested in the first days of the war, and saw his face.

Mr. Shvets, 53, managed to get out of the city and to Ukrainian-controlled territory, where he spoke from his hospital bed. He fears for the plant, the city and the world with the Russian military now holed up in the nuclear station.

Our Coverage of the Russia-Ukraine War

“They are like a monkey with a grenade, not really understanding the threat they are posing,” he said.

Two months before the Russian invasion, Enerhodar celebrated an annual holiday unique to a community living in the shadow of Europe’s largest nuclear power plant: “The Day of the Energy Engineer.”

There were dinners, music, dancing and a fireworks display. “It was enchanting and cool,” said Olha, an engineer who attended the celebrations and fled the city in May, but relayed communications from those inside.

Like other employees of the plant interviewed for this article, Olha would speak only on the condition of anonymity out of fear for her safety.

In a city of 55,000, some 11,000 people worked at the plant. The city’s flag even features a blazing sun in tribute to the energy it provides.

Work on Zaporizhzhia began in 1984. When the sixth reactor came online in 1995, four years after the collapse of the Soviet Union and Ukraine’s independence, Ukrainians celebrated Zaporizhzhia as an accomplishment.

It became both a source of pride and a symbol of Ukrainian perseverance in the impoverished, early post-Soviet years and the aftermath of the 1986 Chernobyl nuclear disaster, which occurred when a safety test simulating the effects of a power failure ended in what many considered to be the world’s worst nuclear disaster.

After Chernobyl, and after Ukraine’s independence, the authorities issued a brief moratorium on nuclear construction, but it was not long before the country forged ahead with its nuclear ambitions. Today, Ukraine is second only to France in relying on its reactor network to meet its electricity needs.

A unique achievement, the Zaporizhzhia site has unique vulnerabilities, as well.

The massive plant was conceived in the Soviet industrial design philosophy known as Gigantism, giving birth to a panorama of industrial prowess, where much of what would seem to be the plant’s inner workings are exposed, rendering it especially vulnerable to the conflict now raging around it.

From the opposite shore of the Kakhovka reservoir, the cooling towers, smokestacks and containment vessels appeared through a haze on a recent summer afternoon, contrasting with the gentle valley of sunflower and wheat fields and rolling hills along the Dnipro River.

Zaporizhzhia has its own radioactive waste storage system, which was established in 1999 with Western backing as a way to end reliance on Russian reprocessing of spent fuel.