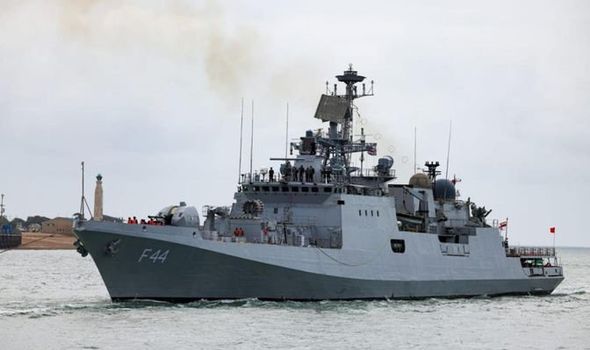 INS Tabar ‑ ‘Battleaxe’ in Sanskrit ‑ had already taken part in the first part of Exercise Konkan at sea, and will engage the newly revamped frigate HMS Westminster in air defence exercises, anti-submarine drills and cross deck helicopter operations, where helicopters will carry out landing procedures.

The exercise was timed to coincide with today’s 75th anniversary of Indian independence to show how relations between both nations have moved on to a new and vital stage.

During the Second World War more than 20,000 Indian sailors fought with distinction in the Royal Indian Navy, and members of Tabar’s 300-strong ship’s company will pay their respects to the fallen of the First and Second World War at the Naval Memorial on Southsea Common.

Tensions with China, and Britain’s global shift to the Indo Pacific, mean the military relationship between both nations is more important than ever before.

Just a few weeks ago Britain’s new carrier, HMS Queen Elizabeth, and the Carrier strike group conducted a series of large-scale exercises with the Indian Navy in the Bay of Bengal which included 10 ships and two submarines.

”These exercises are more than just symbolic. Our navies are gauging each other’s capabilities with complex manoeuvres. It takes a certain degree of trust to undertake anti-submarine and air manoeuvres with another country because you reveal much of your hand. This is serious stuff,” said Alessio Patalano, East Asian Warfare and Security expert at King’s College London.

“One of the most underreported aspects of the Integrated Review was the emphasis on India, and the decision made that part of the broader engagement in the Indo Pacific will mean stronger defence and security relations with India.

“India has emerged as one of this movement’s most important relationships in defence and security terms. That one of the authors of that report, Alex Ellis, has been made British High Commissioner of India is no coincidence.

“Our close cultural ties and regular military exchanges will accelerate the speed with which our defence and security cooperation develops.”

James Rogers of the Council on Geostrategy tank tans added;” ThIs shows that Britain’s tilt toward the Indo-Pacific is more than rhetoric ‑ it is emphasising the fact that it is about action. Both nations are finally taking each other’s interests seriously.

“China sees India as a strategic threat and it is even more important that we don’t allow India to fall into a Chinese camp in the future. We are giving it full support.”

Last night Indian High Commissioner HE Gaitri Issar Kumar told the Sunday Express: “The Indian Navy and Royal Navy share unique historical ties and we have been looking forward to the goodwill visit of INS Tabar, a front-line frigate of the Indian Navy.

“Its joint exercises, along with HMS Westminster of the Royal Navy are aimed at enhancing interoperability, synergy and cooperation between both navies.

“I welcome Captain Mahesh Mangipudi and all ranks of INS Tabar.

“I have no doubt that their visit to Portsmouth, hosted by the Royal Navy will contribute to further strengthening the friendly contacts and cooperation between both Navies.”