The government will pay compensation to people affected by the infected blood scandal if an ongoing inquiry recommends it, the health secretary has said.

Matt Hancock told the Infected Blood Inquiry that the government had a “moral responsibility” to address the issues associated with the scandal.

Mr Hancock said he can “acknowledge the pain and suffering” of the victims of what has been described as one of the worst NHS treatment scandals in history.

The health secretary also accepted that the victims, survivors and their families had never received fair financial support for their suffering.

“So in a sense,” he said, “that redress wasn’t properly considered and people felt their voices weren’t heard. And I want to make sure those voices are heard.” 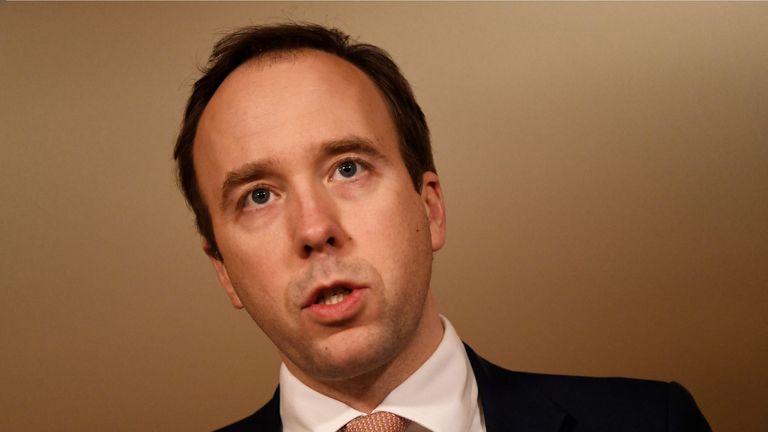 Some 2,400 people died after they became infected with HIV and hepatitis C through contaminated blood products in the 1970s and the 1980s.

Survivors and relatives have been campaigning for compensation, a fair financial support scheme, and an acknowledgement that successive governments and officials have failed to deliver justice.

The health secretary told the inquiry he understood the suffering that had been caused when patients “were given a medical procedure, perhaps a transfusion, all sorts of different medical procedures that led to enormous and terrible consequences for them”.

Des Collins, senior partner at Collins Solicitors – legal adviser to more than 1,500 people affected by the scandal – said: “We urge the government not to lose sight of its obligations to all those who have suffered and those who continue to do so by putting the matter of fair recompense to bed, once and for all.”

Mr Collins said he hoped other key decision-makers – including former health secretaries such as Andy Burnham and Jeremy Hunt, and ex-prime ministers from John Major to Theresa May – will agree to give evidence to the inquiry.

He added: “We need all those involved in leading the effort to protect this nation’s health over the past few decades to come together to achieve justice for those affected.

“We remain hopeful that those with responsibility for past decisions such as Lord Fowler, Lord Clarke, Edwina Currie, Baroness Bottomley, Stephen Dorrell, Alan Milburn, Lord Reid, Patricia Hewitt, Alan Johnson, Andy Burnham, Lord Lansley and Jeremy Hunt, as well former PMs from Major to May, and those in between, will similarly be called and agree to participate.

“Their recollection of events is crucial to help us understand how this scandal came about, the response and how a recurrence can be prevented.”

Mr Hancock’s appearance comes after Scotland’s public health minister Mairi Gougeon told the inquiry on Tuesday that the UK government will need to compensate those affected.

When asked whether it was inevitable that the government will need to provide “substantial compensation” to those infected and affected, the MSP said: “Yes.”

It was announced on Thursday that Sir Robert Francis QC, who chaired the public inquiry into the scandal at Mid Staffordshire NHS Foundation Trust, had been appointed to carry out a study into options for a framework for compensation.

The Infected Blood Inquiry is being led by former High Court judge Sir Brian Langstaff. Two previous inquiries have been branded a whitewash by campaigners.