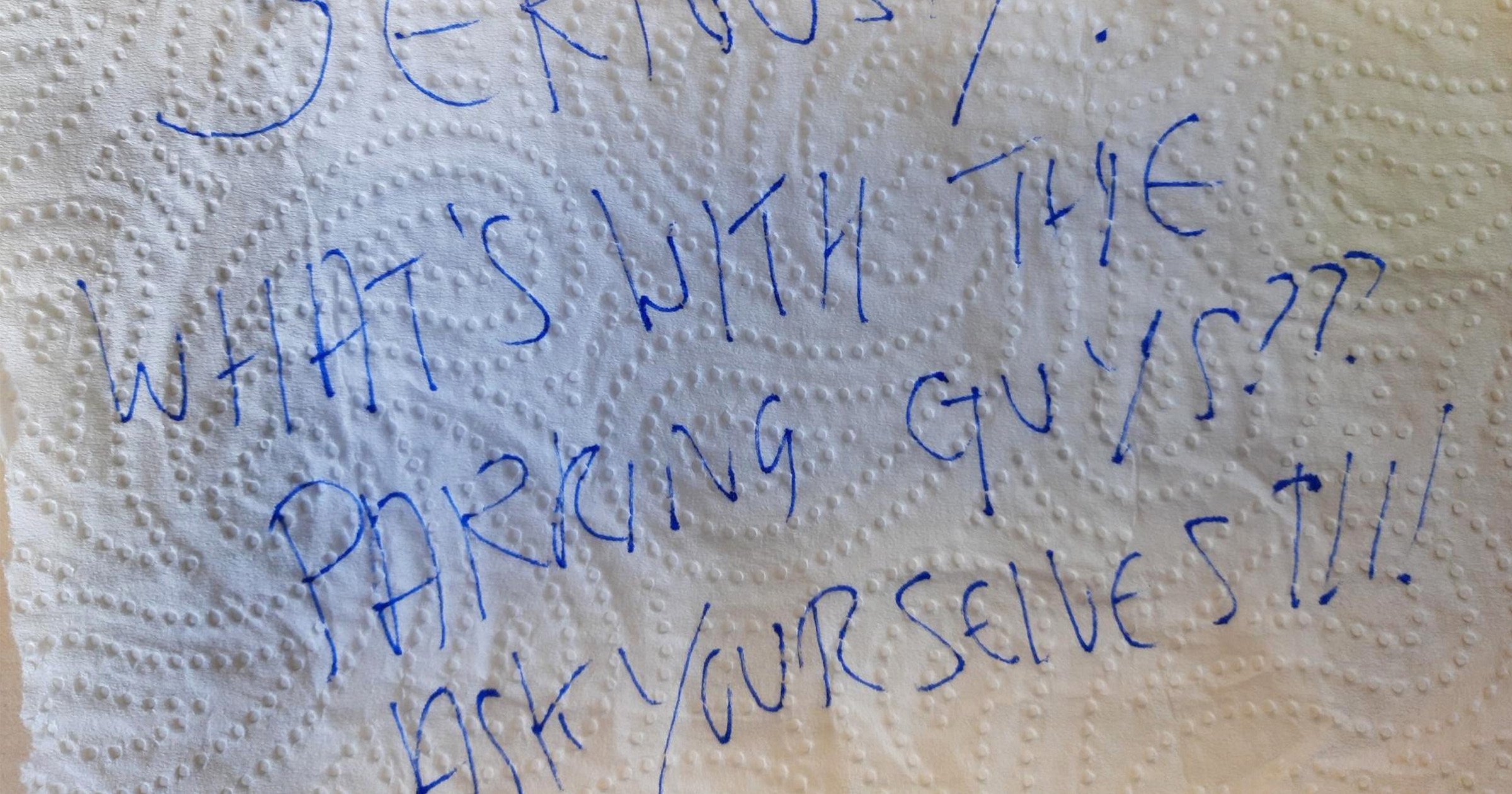 A police officer who was attacked while chasing two wanted men returned to his car to find a note moaning about his parking stuck to the windscreen.

They were called to a pub in Lymington, Hampshire, where staff had been attacked.

One of them hurriedly ditched their car and ran after two people who turned on the cop.

When they returned, they found a note written on kitchen roll.

It read: ‘Seriously? What’s with the parking guys??? Ask yourselves!!!’

An exasperated senior officer explained that they don’t always have time to execute a driving test-worthy parking manoeuvre ‘in the heat of the moment’.

Inspector Darren Ord said: ‘Whilst we appreciate it may be frustrating for residents to see a marked police vehicle parked in a small side street or in an inconvenient place from time to time, on this occasion, a lone officer was seeking to apprehend two men believed to be involved in a reported assault.

‘The officer acted promptly and swiftly in order to do so – which meant he had to park his patrol vehicle in a small road just off of Bridge Street – before detaining and arresting the two individuals.

‘Unfortunately, at times during the duty of a police officer this action is required – and we would hope local residents would understand the reasons why and that officers don’t always have time to explain their rationale.’

A spokesperson added: ‘The two males, who had split from a larger group, had fled from officers and were located on Bridge Road by a single crewed officer who pursued them on foot to arrest them.

‘Neither male complied and the officer was assaulted whilst making efforts to detain them.

‘Both males were arrested a short while later on suspicion of assault and assault police with the assistance of nearby response officers and a dog unit. Fortunately, the officer was not injured.

‘After returning to his vehicle, having pursued the offenders, arrested them and having been assaulted, he located the attached note on his car.

‘We appreciate parking is a common issue, however officers often have to make decisions in the heat of moment and we cannot always explain to residents what is happening and the reasons for our actions.

‘I hope the angered resident can understand the reason for having to leave the vehicle where it was.’

McCauley Thomas Douglas, aged 22, from Southampton, has been charged with two counts of assault and one count of assaulting an emergency worker in connection with the incident.

He was released on bail to attend Southampton Magistrates’ Court on August 25.

A 25-year-old man from Marchwood was arrested on suspicion of assaulting an emergency worker, but was later released and issued with a conditional caution.