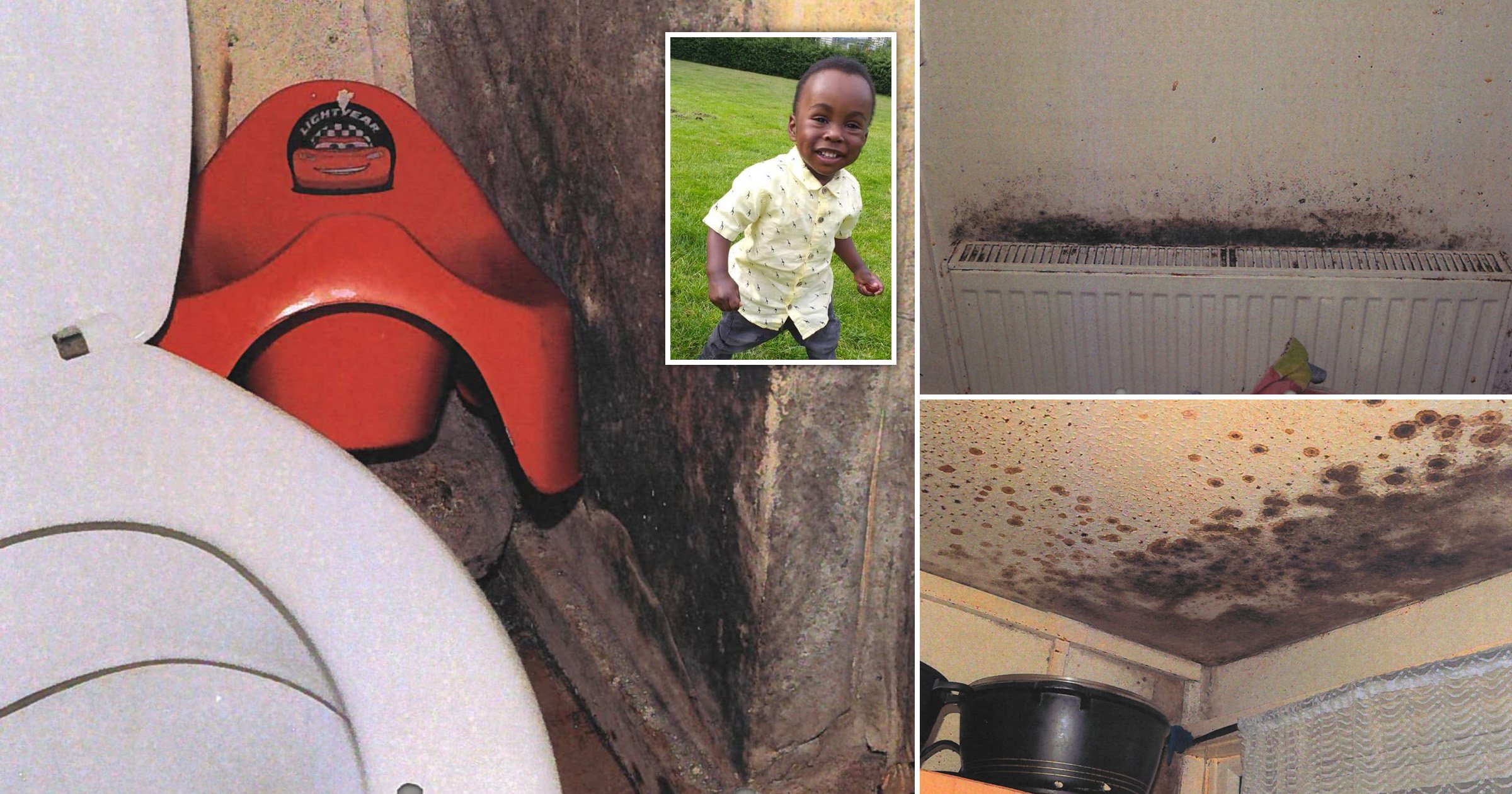 Photos taken inside the damp and mouldy home of a toddler who died from breathing difficulties have been released at an inquest into his death.

Awaab Ishak, who died just a week after his second birthday in December 2020, had a continuous cough and couldn’t breathe through his nose in the final weeks of his life.

Images of Awaab’s home in the Ilminster block on Freehold estate of Rochdale, in Greater Manchester, show appalling mouldy conditions which his dad had been begging the housing company to resolve.

Black spores are seen on the walls and on the ceiling, completely covering parts of the home.

Greater Manchester Police also found thick mould behind radiators, and inside other properties on the estate.

Despite this the conditions of the property, managed by Rochdale Boroughwide Housing (RBH), did not pass the threshold for criminal charges.

Awaab’s dad, Faisal Abdullah, told Rochdale Coroners’ Court he had been phoning and emailing RBH complaining about the mould since 2017, and in 2019 applied for a new house.

One email sent in 2020 said: ‘Kitchen… damp is really bad… I have a kid and my wife, she pregnant. I need further movement please.’

Throughout this time Awaab’s health continued to decline, and he was eventually prescribed an inhaler in November 2020 after he developed a continuous cough and was struggling to breathe.

Health visitors for the young boy also contacted RBH over the condition of the home.

In a conversation with his GP on December 16, 2020, Mr Abdullah said Awaab had suffered a sore throat for three weeks. He was told to ‘seek further review’ if Awaab did not improve.

Just three days later he was taken to Rochdale Urgent Care Centre with breathing difficulties and what his mum described as a ‘rattling noise’, but was discharged with ‘tablets, an inhaler and spray’ to use at home.

Ms Amin said: ‘We didn’t sleep on December 20, Awaab’s chest was worse than before. Awaab managed to sleep for an hour then wake up, he was not well.’

The next day Awaab was taken back to urgent care, where he was transferred to Royal Oldham Hospital, where he died shortly afterwards.

Awaab’s mum said she saw her son for just half an hour after returning from an appointment for her pregnancy.

She said: ‘When I got to hospital I saw my son in bed surrounded by doctors. About 30 minutes after arriving, Awaab died.’

Following his death, Greater Manchester Police raised concerns about the mould seen in Awaab’s family home, and an environmental survey was carried out at the property by Rochdale Council on December 23, 2020.

But detective chief inspector Mark McDonell told the court that the evidence gathered would not meet the threshold for criminal charges being made against RBH on the grounds of gross negligence manslaughter or corporate manslaughter.

Richard Blakeway, housing ombudsman for England, told the court about the findings of a report released last October calling on social landlords to take a more proactive approach to tackling damp and mould – and suggested it could be ‘too simplistic’ to blame residents for the issue.

Awaab’s inquest is ongoing and is expected to last for nine days.