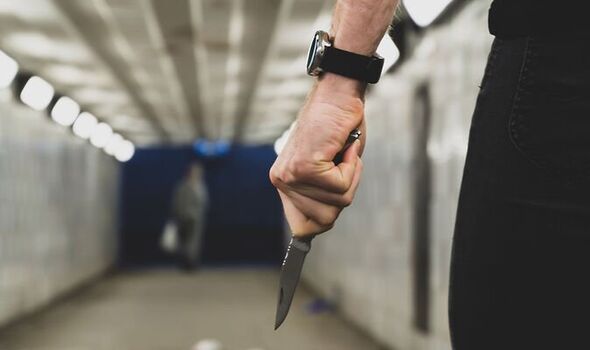 More than half of offenders with previous knife convictions avoided jail ‑ prompting fury that judges and magistrates are “ignoring” the law set by Parliament. The Government introduced a “two strikes and out” rule in 2015 and former Justice Secretary Robert Buckland, in 2020, told judges to enforce the policy.

But of the 2,713 people convicted for a knife offence in the year to September with a previous conviction, 1,370 were not sent to prison.

Former policing minister Sir Mike Penning said: “This is a complete insult to victims of knife crime and Parliament who passed the Act to protect people.

“How many people have been victims of knife crime committed by someone who should have been in prison?

“The Crown Prosecution Service are clearly not pushing for custodial sentences – which is what the law is if you are caught for a second time.

“And the magistrates and judges are just ignoring it as well. The public need to have confidence that people like these cannot hurt the public. I’m absolutely furious about this.”

The Daily Express can also reveal that 2,044 of the 10,0047 adults who avoided jail after being convicted of knife crimes last year had at least one previous conviction.

And four criminals with at least three convictions only received a caution despite being repeat offenders.

This is despite the government introducing a mandatory six-month prison sentence for adults convicted of carrying a knife for a second time.

Judges were given the power to hand out sentences of between six months and a maximum of four years for repeat offenders, while those aged 16 and 17 would face a minimum four-month detention and training.

Frontline police officers yesterday demanded ministers legislate for knife carriers to face similar penalties to those carrying guns – where they will face jail as soon as they are caught and convicted.

Ken Marsh, of the Metropolitan Police Federation, said: “People caught with a knife will keep re-offending unless they are dealt with appropriately.

“We believe that the first time you are caught with a knife, it should result in a custodial sentence.

“How many people do you see walking around on the streets with a gun in the UK? Very, very few because everyone knows that if you do, you will be sent straight to prison if they are caught.

“And we have got to do something similar with knife crime.

“Young people are dying in numbers we never want to see,

“We have got to change what we are doing and the narrative that you will go to prison if you are caught with a knife.

“If we had that narrative, I’m sure there would be a complete change.”

Overall, shocking figures released by the Ministry of Justice yesterday show only 5,728 people caught with a knife were sentenced to prison.

Over 5,000 criminals remain on the streets after receiving a suspended sentence and another 5,100 received a community sentence. Another 2,387 were given a caution.

Steve Reed MP, Labour’s Shadow Justice Secretary, responding to statistics today showing that immediate custodial sentences for knife offences have fallen to their lowest level since 2015, said: “This is yet another major failure to tackle violent crime by this high-on-tax, soft-on-crime Conservative Government.

“The Conservatives have already broken their promise to lock up repeat knife offenders ‑ this is yet more evidence that they are letting violent criminals off and letting victims down.

“Labour would put security at the heart of its contract with the British public, putting police hubs and neighbourhood prevention teams in every community to keep the public safe.”