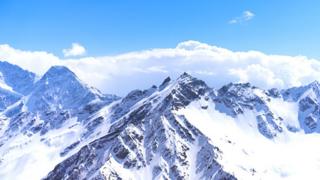 An Irish mountaineer has died during an expedition to Mount Elbrus in Russia.

Alan Mahon, 40, a father-of-three from Kildangan, County Kildare, died on Sunday while descending the mountain in the south west of the country.

It is understood Mr Mahon was with a group of 10 that included five Irish climbers, when they got into difficulty during severe weather conditions. A rescue team was deployed to help them.

Irish broadcaster RTÉ is reporting that the climbers were located by the mountain rescue team at an altitude of about 5,250m.

However it is understood Mr Mahon became unwell during the descent and died.

The Department of Foreign Affairs said it was aware of the case and was providing consular assistance.

Preparations are now being made to have his body repatriated.

The other members of the expedition are said to be safe and well.

Seamus Lawless, 39, a Trinity College professor from Bray, County Wicklow, fell during his descent after reaching the summit in May.

A week after that incident, 56-year-old Kevin Hynes from County Galway died while descending the world’s highest peak.