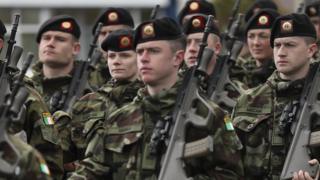 The Republic of Ireland’s military is facing a recruitment crisis as soldiers opt for a more prosperous civilian life, former officers have claimed.

Retired officers have broken with convention and are speaking out about current problems in the ranks.

The Irish Defence Forces are now about 650 members under strength.

The Department of Defence said that the issue of low pay is being addressed and that a recruitment drive is under way.

A combination of factors is causing an “infectious lowering of morale”, one retired officer said.

Former army commandant Frank Reidy, now a defence analyst, told the BBC that it was unprecedented for former officers to speak out in this way.

Pointing out that retired personnel get their information from their former colleagues, he said that he had never heard of morale being so low.

There is scope for further income from allowances.

Cmdt Reidy said it was normal that the Defence Forces shrank after the Troubles came to an end and that following Ireland’s economic crisis, soldiers accepted pay cuts “as much as you can accept it”.

But he said that as Ireland’s economy has improved, the pay in the Defence Forces has fallen behind and “when the pay falls behind, and the economy is vibrant, soldiers leave”.

He said there was no shortage of well-paid work for former soldiers, some of whom are well trained and motivated.

“That leaves more work to be done by the people who are left… the next thing that happens is morale goes down.”

He said that while the numbers leaving may not look huge – those leaving are proportionally more highly qualified leading a “skills drain”.

“Consequently there is an infectious lowering of morale… it affects day-to-day operations, particularly overseas service.”

Growing up in Cobh, County Cork, with a view of the headquarters of the Irish Naval Service, it was natural that Ricky Parker would join up.

He served as a communications operator for five-and-a-half years, but left the service because he did not think he could afford to look after his family if he remained.

“It was probably the toughest decision I have ever made,” he said, adding that he felt he was really good at his job.

“I was sitting waiting for the wages increase when the workload started getting tougher and tougher… more hours for the same pay.”

Many of his former colleagues are in the process of leaving with some of them having to pay to leave the naval service, he said.

Ireland’s minister of state at the department of defence, Paul Keogh, is effectively a junior minister – Taoiseach (Irish prime minister) Leo Varadkar is officially in charge of defence.

But Cmdt Reidy believes that Mr Varadkar does not have a “hands-on role” with defence and that this “downgrading” has also affected morale in the services.

Cmdt Reidy’s comments follow a former chief of the army saying the government is treating the Defence Forces “with contempt and disdain”.

Retired Brigadier-General Ger Aherne said that various add-ons that made military life bearable – such as married quarters for families – have not been retained, adding that a statutory pay body is needed to review Defence Forces pay, similar to a model used in the United Kingdom.

Cathal Berry, who was deputy commander of the elite Army Ranger Wing, said career administrators who do not have any military experience are making defence and security policies.

The case of the rank and file

The head of the main organisation which represents rank and file soldiers, PDFORRA (Permanent Defence Force Other Ranks Representative Association) said it has long campaigned for increases to pay and allowances for enlisted personnel.

Ger Guinan said people are leaving because its economically “not sustainable” to remain.

“In reality, the Defence Forces find themselves in the perfect storm with an ever discerning demographic of potential employees, better pay and conditions in other sectors of society and an area of employment that is tough at the best of times,” Mr Guinan said.

A spokesperson for Ireland’s Department of Defence told the BBC that the Permanent Defence Force envisages taking in 800 new recruits in 2019 and that issue of low pay is being dealt with “in accordance with public sector pay agreements”.

“The focus of these agreements is weighted in favour of those on lower pay,” the spokesperson said.

The spokesperson added that the Defence Forces have a high turnover, but that is a feature of military organisations internationally and is not new given that personnel “acquire specialist skills which are highly sought-after in the private sector”.