The mother of a suspected IS terrorist has lost a High Court challenge to stop the UK sharing evidence with American authorities.

Maha Elgizouli, whose son El Shafee Elsheikh is in US custody with his co-accused Alexanda Kotey, brought a judicial review earlier this month over Home Secretary Priti Patel’s decision to provide material to the American government under a “mutual legal assistance (MLA)” request.

Elsheikh and Kotey are accused of belonging to a IS cell of executioners in Syria – nicknamed The Beatles because of their British accents – responsible for killing a number of Western captives. 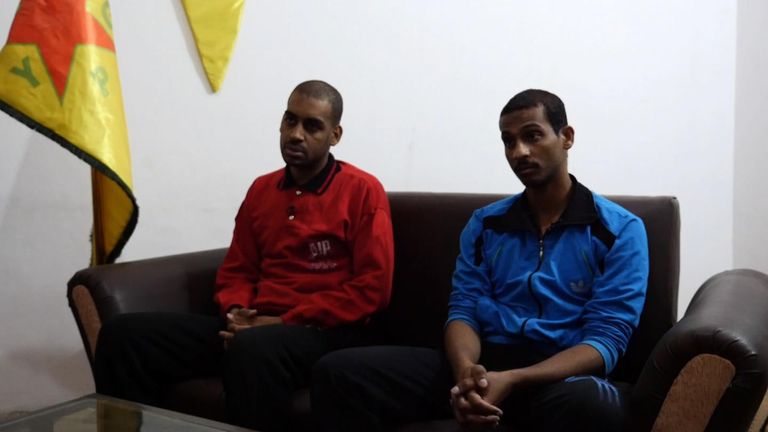 They are facing trial in the US.

At a hearing in London on 11 September, Ms Elgizouli’s lawyers argued Ms Patel’s decision was unlawful as it was incompatible with the Data Protection Act (DPA), and asked the High Court to order that no material should be provided to the US.

They said the transfer of the evidence was “not strictly necessary” as it was made at a time when the Director of Public Prosecutions (DPP) was due to make a decision “imminently” about whether there was enough evidence to prosecute Elsheikh in the UK – which US authorities previously indicated a preference for.

But in a ruling on Tuesday, Dame Victoria Sharp and Mr Justice Garnham rejected the case, saying it was “not properly arguable”.

Dame Victoria said previous expressions of preference as to where a prosecution should take place were of “no relevance” to the issues the court had to decide.

She added: “The conclusion that, even if Mr Elsheikh could be prosecuted in England, it would still be necessary and proportionate to transfer the data to the US authorities remained a conclusion properly open to the Secretary of State.”

The hearing was held urgently as the US government indicated it will transfer the pair to Iraq for trial if it does not receive all the evidence the UK has on them by 15 October.

If the pair are found guilty in Iraq they face a death sentence. Dame Victoria said in the ruling that the Crown Prosecution Service (CPS) has concluded there is sufficient evidence to prosecute Elsheikh for a number of “terrorism-related offences”, but that they required either the consent of the Attorney General, Suella Braverman, or her permission for the DPP to consent to a prosecution.

The judge said the Attorney General had indicated on September 10, in response to a request from Ms Elgizouli’s solicitors, that “it is simply not possible to give and indication of timescale” as to when she would reach a decision.

The court previously heard there was a charging decision by the DPP in 2016, with the consent of the Attorney General, that there was sufficient evidence to charge Kotey – whose whereabouts were then unknown – with five offences of murder and eight of hostage taking.

Elsheikh and Kotey, who were raised in the UK but have been stripped of their British citizenship, were captured by the Syrian Democratic Forces in January 2018, sparking an international row over whether they should be returned to the UK for trial or face justice in another jurisdiction.

They were transferred to the custody of the US military in Iraq in October 2019 and remain in American custody.

American officials revealed last month, in a letter to Ms Patel from US attorney general William Barr, that they will not insist on the death penalty for the pair following any prosecution.

Ms Elgizouli previously brought a challenge to former home secretary Sajid Javid’s decision to share evidence with US authorities without seeking assurances the men would not be executed if convicted in the US.

Her case was dismissed by the High Court in January 2019 but that decision was overturned in March this year by a panel of seven Supreme Court justices, who unanimously allowed her appeal – ruling the decision to share evidence with the US was unlawful under the Data Protection Act.

Elsheikh and Kotey are said to have been members of the cell that also included Mohammed Emwazi, known as Jihadi John, who was killed in a US air strike in 2015, and Aine Davis, who has been jailed in Turkey.

A BEAUTY boss with a party-girl lifestyle who was jailed for transporting cocaine worth £1.5million has been ordered to repay just £41. Cops caught Porsche-driving…