The Italian bid was up against a joint candidacy from Sweden’s Stockholm and Are. 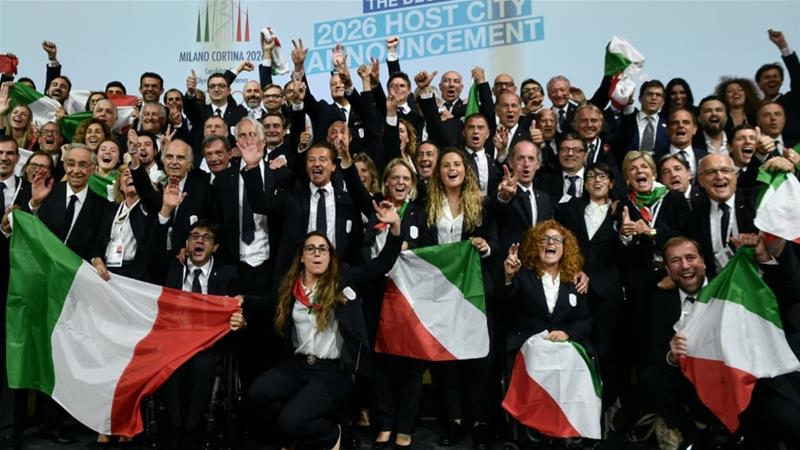 Italy has won the rights the host the 2026 Winter Olympics following a vote by the International Olympic Committee (IOC).

The joint bid by the city of Milan and the ski resort of Cortina on Monday won 47 votes, edging out the candidacy from Sweden’s Stockholm and Are, which received 34 votes at the session in Lausanne.

The IOC will contribute at least $925m towards the cost of the Italian games, expected to be up to $1.7bn.

“Thanks to those who believed in it right away, especially in the municipalities and regions, and a pity for those who gave up.”

Italy’s economy is struggling, with European Union officials considering how best to sanction Rome over its mismanagement off debt. But Salvini, the populist leader of the far-right League party promised “at least five billion [euros] in added value, 20,000 jobs, as well as many new roads and sports facilities”.

“With the Winter Olympics, we will confirm our excellence and our skills to the world.”

Cortina previously hosted the Winter Games in 1956, but the 2026 edition will get under way with an opening ceremony in Milan’s San Siro stadium. Earlier on Monday, it was announced that the 80,000-seater San Siro, built in 1926, is set to be demolished and rebuilt in the coming years.

The announcement ceremony on Monday afternoon got under way with delegates standing for the Olympic anthem, before a 10-year-old figure skater handed the all-important envelope to IOC President Thomas Bach, himself the 1976 Olympic gold-medal fencing champion.

Chants of “Italia! Italia!” rang around the conference hall in Lausanne, Switzerland, after the announcement.

Sweden is a winter sports powerhouse, but has never staged the Winter Olympics. Prime Minister Stefan Lofven made a last-ditch appeal on Sunday, saying, “The Swedish government stands fully behind this candidacy and we look forward to delivering it,” but just over half of Swedes were in favour of the country being awarded the Games, according to an IOC-commissioned poll.

Earlier on Monday, it was revealed the IOC had signed a joint sponsorship deal with Coca-Cola and China Mengniu Dairy – China’s biggest milk producer – worth a reported three billion dollars.