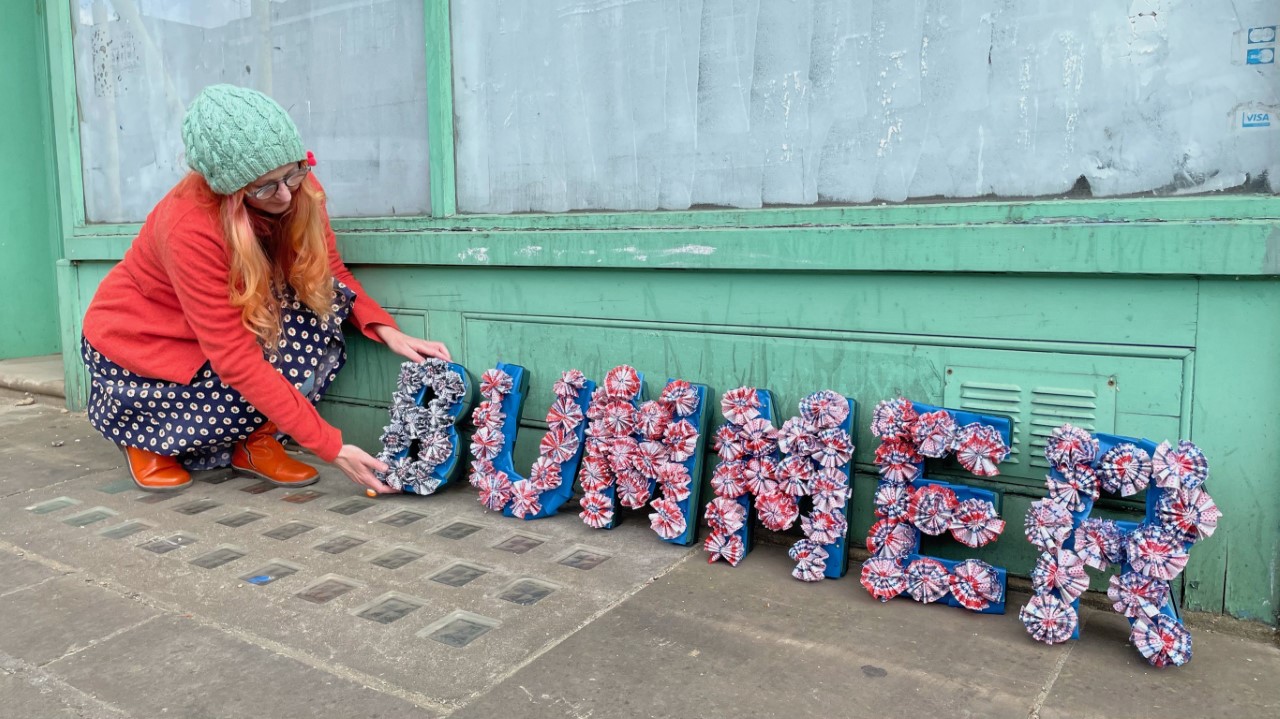 I’ve been mourning the death of independent shops killed by Covid.

It was on a meander through Islington in February of this year that I headed for Barnsbury Stores on Hemingford Road.

A charming old drug store from which I used to buy booze and fags before long Friday film nights with friends nearby. I found it shuttered and empty,

Some of the happiest weekends I’ve known started in that store, and its ruin was disconcerting and awful. Actually, it scared me. I feared for all my other favourite haunts.

I felt compelled to lay some sort of tribute outside it – something to stop it looking so lifeless. The place was gutted, and so was I. So, ‘gutted’ was the floral word wreath I decided to lay. It was the first one.

It’s been reported that, with both closures and new openings taken into account, the number of physical shops on British streets dropped by 11,000 in 2020. And it’s predicted thousands more will likely close by the end of this year when government grants dry up – the Local Data Company thinks that up to another 18,000 will perish.

Those numbers are unsurprising, seeing as research by insolvency specialist Begbies Traynor found that almost 40,000 retailers (physical shops as well as online outlets) were already in serious financial trouble at the end of last year, before the latest lockdown was implemented.

Shops that have been the beating heart of our high streets for years are now empty and still. Each one represents a family or group of families whose ambition and livelihood was taken along with their premises.

The day after seeing Barnsbury Store, I bought some letter frames – usually used by florists to pin fresh flowers to when they make wreaths and displays – so I could make my own tribute.

I wanted my display to have permanence and also be relevant to shops, so I decided to use unwanted traders’ bags to make my flowers from. I spent a number of evenings lost in my task and, as I became absorbed in hand-making each flower and ribbon, I felt my sense of powerlessness and anger begin to evaporate.

I have considered myself a craftivist for some time, believing that craft can be a powerful device for activism. This gentle way to protest has been a strong balm to the sense of hopelessness I’ve faced.

As I lay my ‘gutted’ wreath and stood with a friend who was kindly filming the event, something uplifting happened. The few people walking past smiled, or stopped and asked what was happening.

They talked about what the shop meant to them, what could be done, how important it was to show gratitude. And for a time, the energy of that spot on the street changed.

It’s then that I decided to do this for more of the shops that mattered to me, that served me for as long as they could. And I wanted to urge others to do the same, to visit the stores they miss and lay something outside – a bunch of flowers, a card, a letter – anything that might alter the energy of our beleaguered streets and pepper them with quiet mirth and appreciation.

I went on to make four more wreaths. I chose words that are casual and light without being disrespectfully flippant. ‘Fed up’ was for a local deli on Caledonian Road, ‘drat’ for a repair shop along the same street, ‘bummer’ for a vintage clothing store near Chalk Farm, ‘f**kity-poo’ for a grocer on Kentish Town High Street and ‘fiddlesticks’ for a music shop just behind it.

Although I tried phoning the owners of each shop when I laid the tributes, the numbers were unobtainable so I don’t know if they ever got to see the wreaths made for them. I hope they did.

Laying them among the empty streets of Camden and Islington gave me cause to reflect on what was now missing and what else I feared to lose. The familiarity. The visual richness. Or perhaps most of all, the variety.

I dread a future in which granite and glass monoliths strangled with ring roads replace our human-scale, multi-flavoured independent retailers as the place to buy curtain hooks and cheese.

Now that stores have reopened, we have a better idea of which ones were merely asleep during this time and which haven’t made it. And the ones that have reawakened need our help.

It’s time to vote with our money for the world we want to live in, to think about who or what is benefiting from our purchases and to make better decisions about where we shop.

Are we, for instance, happy to prioritise convenience over sustainability? How do we feel about reports of giant online retailers throwing returned clothing into landfill because it’s easier than reselling it?

Are we upset enough by that? By the unimaginable waste it creates and the reckless plundering of earth’s resources?

If we want to honour the small shops that died during this pandemic we should make them a pledge to shop with vigorous curiosity about how the things we buy are made. To embrace the relative inconvenience of shopping face-to-face again. To buy less often so we can afford to pay a little more for something well made for a fair wage. And to evolve as a species to eliminate the craving for immediacy and the habit of treating things as disposable.

To the independent shop keepers who have opened, I want to wish them all the luck in the world. And to the ones who haven’t, I want to remind them that it takes courage and resilience to create a business. Your shop may have been taken but your grit and your heart are a part of you and cannot be locked down.