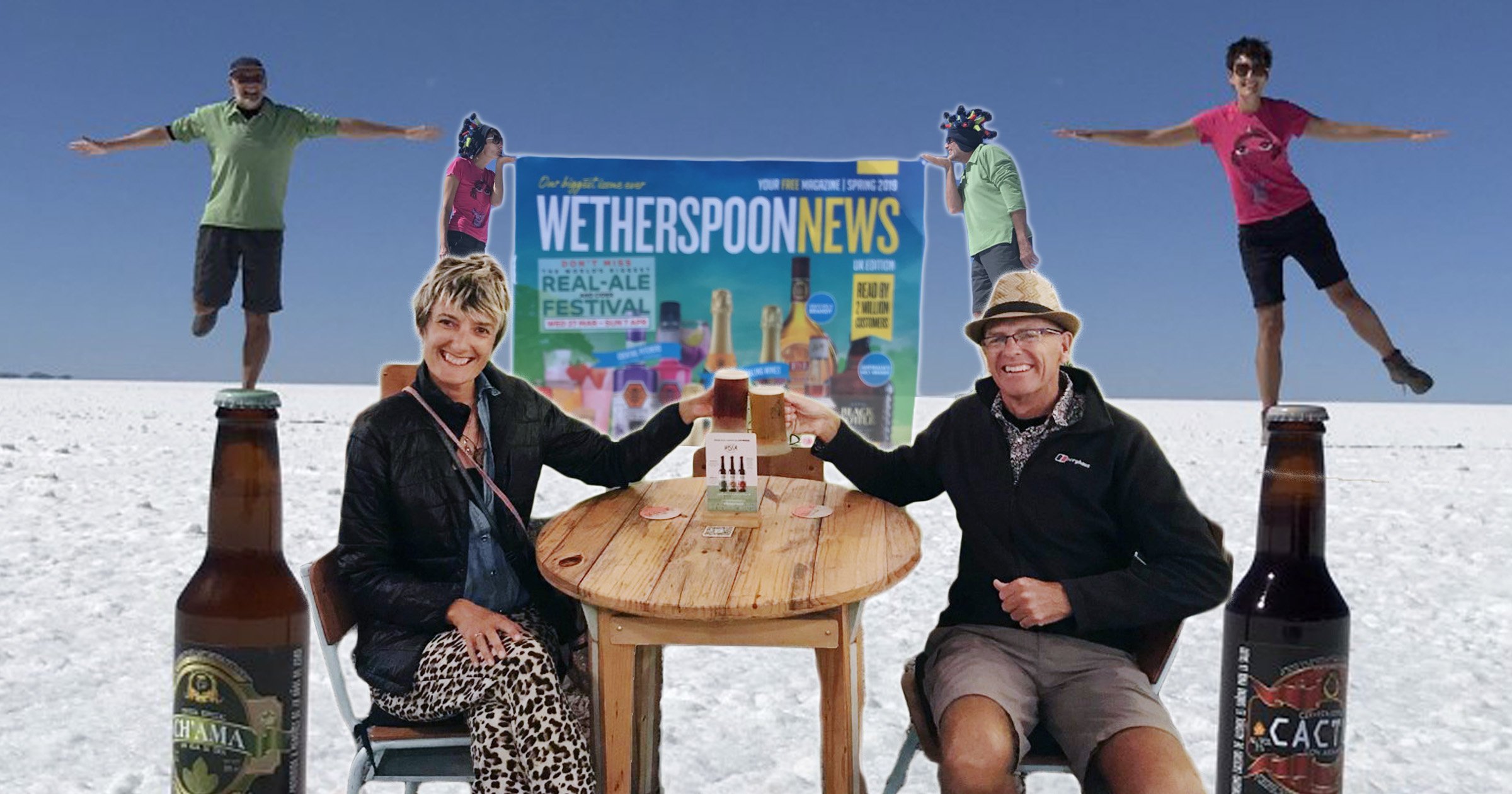 A flight-hopping couple who are obsessed with visiting airports and Wetherspoon pubs are back home after a year of travel adventures.

Alan and Agnieszka Forbes have ‘collected’ 160 airports between them, including two remote strips in Malaysian Borneo, and 150 ‘Spoons’ in their most active year since Covid travel restrictions were lifted.

To date, Alan has visited different 985 airports and Agnieszka 483, and they plan to stop counting after reaching 1,000 and 500 respectively.

They have also visited 822 Wetherspoon pubs and find exploring new parts of the UK on the chain’s map just as exciting as far-flung adventures.

The former travel industry workers’ last stop was a visit to Agnieszka’s family in Poland before they landed back in the UK at Gatwick on Christmas Day.

Alan, 62, and Agnieszka, 44, began the year with six weeks in Colombia before returning to the UK and then jetting off again to spend five weeks in Argentina.

They have since taken in Albania, Bosnia and Herzegovina, Germany, Greece, Kosovo, Romania twice and most recently Thailand, Malaysia and Singapore.

The full-time travellers rounded off with the visit to Agnieszka’s family in Kraków and flew back on Wizz Air as they returned to Woldingham in Surrey.

Their new year plans include continuing in their mission to visit every Wetherspoon pub — they have around 70 left to do — as the venues open and close.

Alan said: ‘We always find a positive in everything but Colombia was absolutely fantastic and neither of us had been there before. Argentina we’d been to before but we went to different parts, which was fantastic.

‘We also love Greece and Italy. For us though it’s really about the travelling and it’s the same with the pubs. We can look back now and see the places we wouldn’t have thought to have gone to in the UK because of the pubs. We get as much as thrill going to a pub in a place in the UK we’ve never visited as we do going to the other side of the world. It’s all about going somewhere you’ve not been before.’

The keen hikers, who met a decade ago and married in June 2021, visited 23 airports across Malaysia and Singapore on their visit to the far east this year.

Of this number, 14 were remote facilities in Malaysian Borneo including Long Seridan, where one end of the runway is 60 metres from a river, and Long Akah, which lies next to a small settlement.

Alan said: ‘The airports are in tribal areas and although they are not living a tribal existence because they are coming into the 21st Century they are very remote.

‘You can’t reach them by river let alone by road and the scenery is spectacular.

‘There is no security and no crowds.

‘There were two that we didn’t do there and I am speaking to guys at Malaysian Airlines to see if they will sponsor us to go back as the air fares are getting a bit silly.

‘If not we’ll probably go back to India to do some more there.’

Alan, who has three children and one grandchild, worked for an airline after leaving school before becoming a partner in a travel company.

He then took on a number of part-time jobs including as a dog walker, an airport baggage handler and working with autistic adults. Agnieszka, who is originally from Poland, worked for a five-star Caribbean hotel chain as director of sales for Europe.

Alan began crossing off airports more than four decades ago before Agnieszka joined him in 2012.

The experience collectors gave up work four years ago, since when they have regarded travel as a full-time preoccupation. They have also visited airports at a mountainous location in Mestia, Georgia, Potosi in Bolivia, which was formerly the highest commercial facility in the world, and landed on the 798-metre strip on the beautiful Greek island of Kastellorizo.

Travel pursuits at home include a National Trails collection, with the couple having completed 15 walks in England and Wales amounting to 2,000 miles.

Alan traces his obsession with clocking up visits to new places back to his teenage years.

‘It all started with a throwaway comment,’ he said.

‘When I was a young kid I started going to football at Leeds and I met a guy who said he was going to all 92 football grounds. I liked the sound of that so I started doing it as well.

‘Then when I was at work one night I was speaking to one of the guys about how many grounds I’d been to and he said I’d probably been to more airports than that. It had never entered my head but I love travelling and thought, “right I’m going to see how many airports I can go to”.

‘I managed to do it while I was working and having a family and doing the normal things in life. It was always a bit of an obsession but it was under control.

1. The Man in the Moon, Newport, Isle of Wight

5. The Chief of Justice, Keswick

‘Then when Agnieszka and I gave up work four years ago I became obsessed with it, so I thought I’d do 1,000 and bring it to a close. We won’t stop travelling, but we will stop counting.

‘With football grounds and Wetherspoon pubs you have new ones opening up or new teams coming into the league but you know there’s only ever going to be a finite number, whereas with airports you might do all the ones in a country but you’re never going to go every single one in the world.

‘Bizarrely, I don’t count the number of countries I’ve been to, as I know I’ll never do them all.’