Vincent Reffet, a French stuntman known for limit-defying jumps from the world’s tallest towers and highest mountains, and aerial feats alongside planes using a jetpack, died in Dubai during a training session on Tuesday, his company said. He was 36.

A free-flying world champion and avid BASE jumper (involving leaps from towering static objects rather than from a plane), Mr. Reffet had undertaken breathtaking feats including a record-breaking jump of over 2,700 feet from a platform above the Burj Khalifa, the world’s tallest building, and a midair dive into a plane from a 13,000-foot mountain in Switzerland.

Jetman Dubai, of which he was a member, confirmed his death but provided no further details. The police in Dubai and the United Arab Emirates’ General Civil Aviation Authority did not respond to requests for comment.

“Vince was a talented athlete and a much-loved and respected member of our team,” Jetman Dubai said in a statement, adding that the group was working with the authorities.

Mr. Reffet’s stature soared in 2015 after he caught the attention of Yves Rossy, a Swiss aviation enthusiast who became the first man to fly with a jet-propelled wing and later invited Mr. Reffet to become a second “Jetman” for his group.

In Dubai, the group worked with XDubai, an extreme-sports brand that has been endorsed by the crown prince. In one stunt that went viral, the pair flew with jetpacks above Dubai beside an Emirates Airbus 380, the world’s largest passenger aircraft. 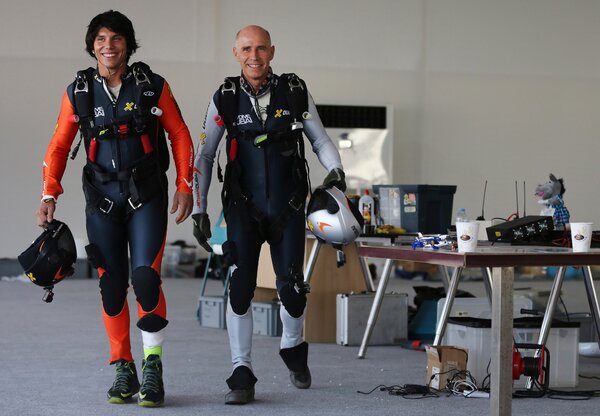 The son of two sky divers, Mr. Reffet grew up in Annecy, in eastern France. He was introduced to the world of aerial stunts at an early age, making his first solo jump in 2000, according to a biography on the site of Redbull, the energy drink that sponsored him. Many of his feats were made with his friend and close collaborator Frederic Fugen, with whom he also started Soul Flyers, a team of parachutists and jumpers.

In interviews, Mr. Reffet had spoken of the liberation that flying with a jetpack gave him and the joy he felt pushing boundaries.

“It’s the sensation of freedom,” he told The Associated Press in 2015. “When I am skydiving, I have like this feeling of freedom — I can like pretty much go where I want — but always going down.” Yet with the jetpack, he said, “I can fly like a bird.”

BASE jumping is one of the world’s most dangerous recreational sports, and even with a jetpack, Mr. Reffet was aware of the dangers involved in his stunts.

“To be completely autonomous, there is a risk, you know, to lose your life. Something goes wrong, you have to act fast,” he said in “Loft: The Jetman Story,” a documentary. And the exhilaration of feats like zooming into a plane over Swiss mountains was a “mental” battle that would leave a person “sick to your stomach,” he told the Agence-France Presse news agency last month.

His feats over landscapes like Dubai’s skyline, Europe’s highest mountain, Mont Blanc and Tianmen Cave in China, shot in high definition and posted on YouTube, brought audiences around the world into the experience.

⁣In February, he accomplished what Jetman Dubai called a first: taking off with a jetpack from the ground before making a high-altitude flight, a move reminiscent of the Marvel hero Iron Man.

He also recently said on social media that there was “much more to come.”

Fans paid tribute to Mr. Reffet on his Instagram page on Wednesday, with some saying that he had inspired them to enter the sport. “You and Fred are both the reason I started jumping 7 years ago,” one wrote, referring to Mr. Fugen, his collaborator. “Forever fly free.”