Democrat Joe Biden has won the state-by-state electoral college vote that formally determines who is the next US president.

The victory has all but ended President Donald Trump’s floundering campaign to overturn his loss of the US general election last month.

California, the most populous state, delivered its 55 electoral votes to Mr Biden on Monday afternoon, officially taking him over the 270 votes needed to secure the White House.

When all of the states finish voting, Mr Biden is expected to lead Mr Trump 306-232.

We’ve seen a lot of end of the road moments for Mr Trump’s but today is one of the biggest. After multiple failed legal challenges to overturn the election, it was time for 538 electors to meet in their respective states to cast their votes for the president and vice president.

States have been certifying their results in what has been a kind of rubber-stamping exercise, albeit pivotal in cementing victory.

It usually passes without much fanfare or comment. It’s typically a dry, procedural affair, but Mr Trump’s refusal to accept Mr Biden as the winner injected some jeopardy into the occasion.

In Michigan, the state capitol was closed to the public because of perceived “credible threats of violence,” an official said.

In Arizona, electors had to cast their votes in a secret location due to threats.

The president may have succeeded in sowing doubt about the electoral process among a proportion of his followers, but the electors in the key swing states he’s been trying so hard to win back, re-confirmed his defeat.

Mr Biden not only won the 2020 election but decisively – getting back the all-important Rust Belt, but he also upset decades of Republican dominance in Arizona and Georgia.

Stacey Abrams, an elector critical in driving the vote for Mr Biden in Georgia, reminded the country of the challenge ahead. America, she said, is still grappling with “who we intend to be as a nation”.

In previous years, so-called faithless electors, who stray from the popular vote, have been factor in the electoral college vote. It’s rare, but this year, there’s been hardly any talk of people switching from Mr Biden to Mr Trump in any meaningful way to change the outcome. Mr Trump’s fate was arguably sealed a long time ago. But on Friday came a critical blow. The Supreme Court, filled with three Conservative justices he picked, rejected his eleventh hour bid to overturn the election based on a Texas lawsuit.

He tried to remove electors in some states ahead of today’s vote but the highest court in the land refused to support that effort. 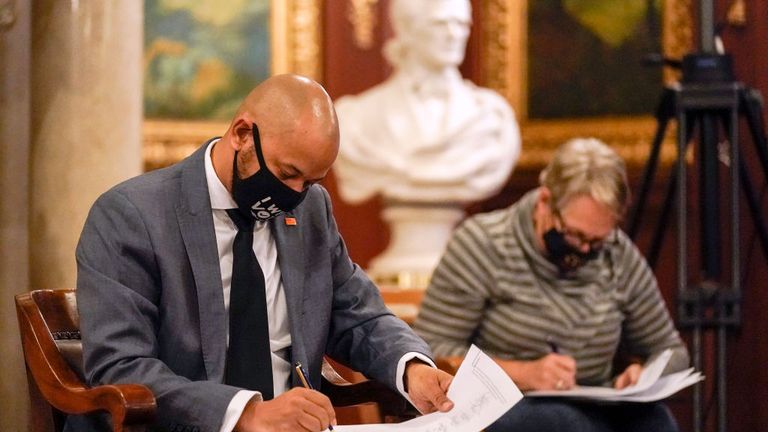 The next big moment for the electoral process is 6 January, when Congress gathers to count the electoral votes. At that point the winner will be announced by Mike Pence, who presides over the Senate as vice president.

Mr Biden will take office at the inauguration on 20 January. It seems unlikely that we’ll see any big concession from Mr Trump between now and then. He’s already dangling the prospect of announcing a 2024 bid, on the same day.