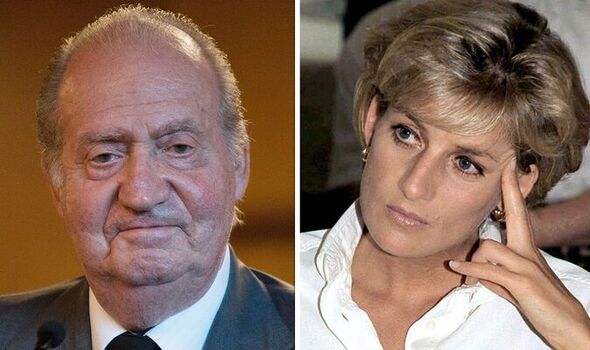 An ex-lover of the former King of Spain, Juan Carlos, alleged “intruders” left at her apartment a book about the “involvement of the British and US intelligence agencies” in the death of Diana, Princess of Wales, the Court of Appeal heard on Tuesday. Three appeal judges began considering today detailed arguments from the legal representatives of the ex-Spanish monarch and Danish businesswoman Corinna zu Sayn-Wittgenstein-Sayn, as he seeks to challenge a previous ruling he can face trial in the UK.

His lawyers had argued he is “entitled to immunity from the jurisdiction of the English courts in his capacity as a senior member of the Spanish royal family”.

The businesswoman is seeking damages for personal injury and alleges he caused her “great mental pain” by spying on and harassing her.

The former King, who abdicated in favour of his son King Felipe in 2014, denies any wrongdoing and disputes the claims made against him.

During today’s hearing, the businesswoman’s legal team claimed “an operation” was carried out by Spanish intelligence agents at her apartment in Switzerland.

Alongside the claim regarding the book left at the businesswoman’s residence, a barrister also told the court she alleges to have received a “follow-up telephone call” from an “unknown person” who made an “allusion” to the manner in which Diana died.

All the allegations and conspiracy theories made following the crash in Paris which claimed the life of Princess Diana were deemed without foundation in 2008, at the end of a Metropolitan Police inquiry established four years prior.

In a written case outline, he wrote: “The issue raised in this appeal is whether (Juan Carlos) is entitled to state immunity in respect of those elements of (Ms zu Sayn-Wittgenstein-Sayn’s) claim for harassment that pre-date his abdication on 18 June 2014.

“These acts include those of (Juan Carlos’s) loyal friends with intelligence and surveillance agents as his agents.”

He added: “(Ms zu Sayn-Wittgenstein-Sayn’s) case against (Juan Carlos) in relation to post-abdication allegations of harassment is currently stayed pending determination of this appeal.”

Ms zu Sayn-Wittgenstein-Sayn, who lives in England and has a home in Shropshire, wants an “injunction and damages” resulting from “a continuous and ongoing campaign of harassment” against her, “commenced” by (Juan Carlos) from 2012, following the “break-up of an intimate romantic relationship” and her “refusal to let (Juan Carlos) use a financial sum irrevocably gifted to her, or to return other gifts”, the judges were told.

Her legal team alleged to the judges that conduct “includes (the former king) or his agents smearing her and her business in the media, following her, entering her home in Shropshire, and bugging her homes and electronic devices”.

Timothy Otty KC, who is leading Juan Carlos’s legal team, told the Appeal judges in a written argument: “His Majesty… emphasises at the outset that he considers this claim to be vexatious.

“He emphatically denies that he engaged in, or directed, any harassment of the respondent whatever, and he rejects her allegations to the contrary as untrue and inconsistent with previous public statements made by her.

“The allegations also involve an alleged abuse of power wholly inconsistent with His Majesty’s important role in the transition of Spain to a successful parliamentary democracy and his long period of service as sovereign.”