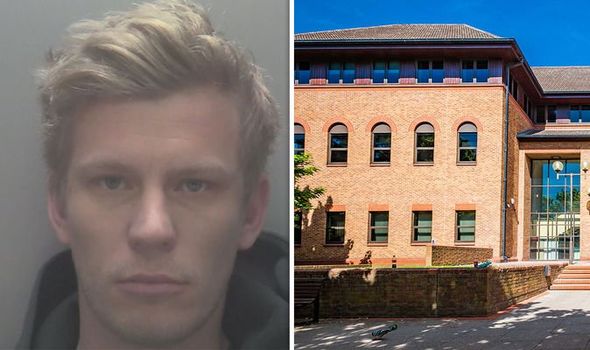 Daniel Carrington, 36, tricked his 84-year-old gran into leaving her home by calling her and pretending to be a member of staff at her hospital, saying she needed to come in for an urgent appointment. When she was out, Carrington smashed his way in through a patio and took a safe containing the medals and £5,000.

And months later when Carrington was on bail for this offence, he and another masked yob carried out a shocking pub robbery.

During the robbery at The Lion Brewery in Ash, Surrey, he tied up a woman and told her he would kill her eight-year-old daughter if she did not comply.

The girl was found cowering in her bedroom clutching her cuddly toys.

Carrington, who is a dad, was jailed yesterday for 10 years after pleaded guilty to aggravated burglary, burglary, and possession of a knife.

“You had a scheme to get your grandmother out of her home and burgle her.

“During it you took a substantial amount of money but, moreover, you took her late grandfather’s war medals.

“How you can sleep at night with such despicable behaviour I don’t know.

“Later on you carried out an appalling aggravated burglary.

“You obviously thought there were rich pickings in this pub and you subjected the woman there with violence where she was hit over the head with the butt of a handgun.

“You tied her up, you threatened to kill her daughter and she was found cowering in her bedroom.”

She had gone to Ripley Hospital on the understanding she needed a blood test but staff there told her this wasn’t the case.

Mr Heath said: “CCTV showed two men walking down the alleyway at the side of the house.

“One of them was later identified by the grandmother as being her grandson, Mr Carrington.

“In her victim impact statement she says she cannot believe a member of her own family would do this to her.

“She said ‘if he had told me he needed money I would have given some to him’.”

The armed burglary at the pub in Surrey happened in December last year.

Carrington and his accomplice, who was the gunman, barged their way in.

Mr Heath said: “The other man pointed the gun at her face while Mr Carrington, who had a knife, held her.

“When she asked why there were there, Mr Carrington said ‘shut up or I will kill your daughter’.

“He then got cable ties and tied her (the landlady) up.

Mr Heath said Carrington left his DNA on the knife which was found by police at the scene.

He told detectives he had been forced to become involved by people he was in debt to and who said they would kill him of he didn’t do what they said.

The defendant, from Oakham, Rutland, had been working as a head chef at what he called “the upmarket” Crown Inn, which was affected by the pandemic.

Haroon Khattak, defending, said: “During the Covid pandemic he was furloughed and that led to him taking cocaine and getting a substantial drug debt.

“He has a 10-year-old daughter who is disabled and who he has not seen for nearly two years, since he was remanded.”