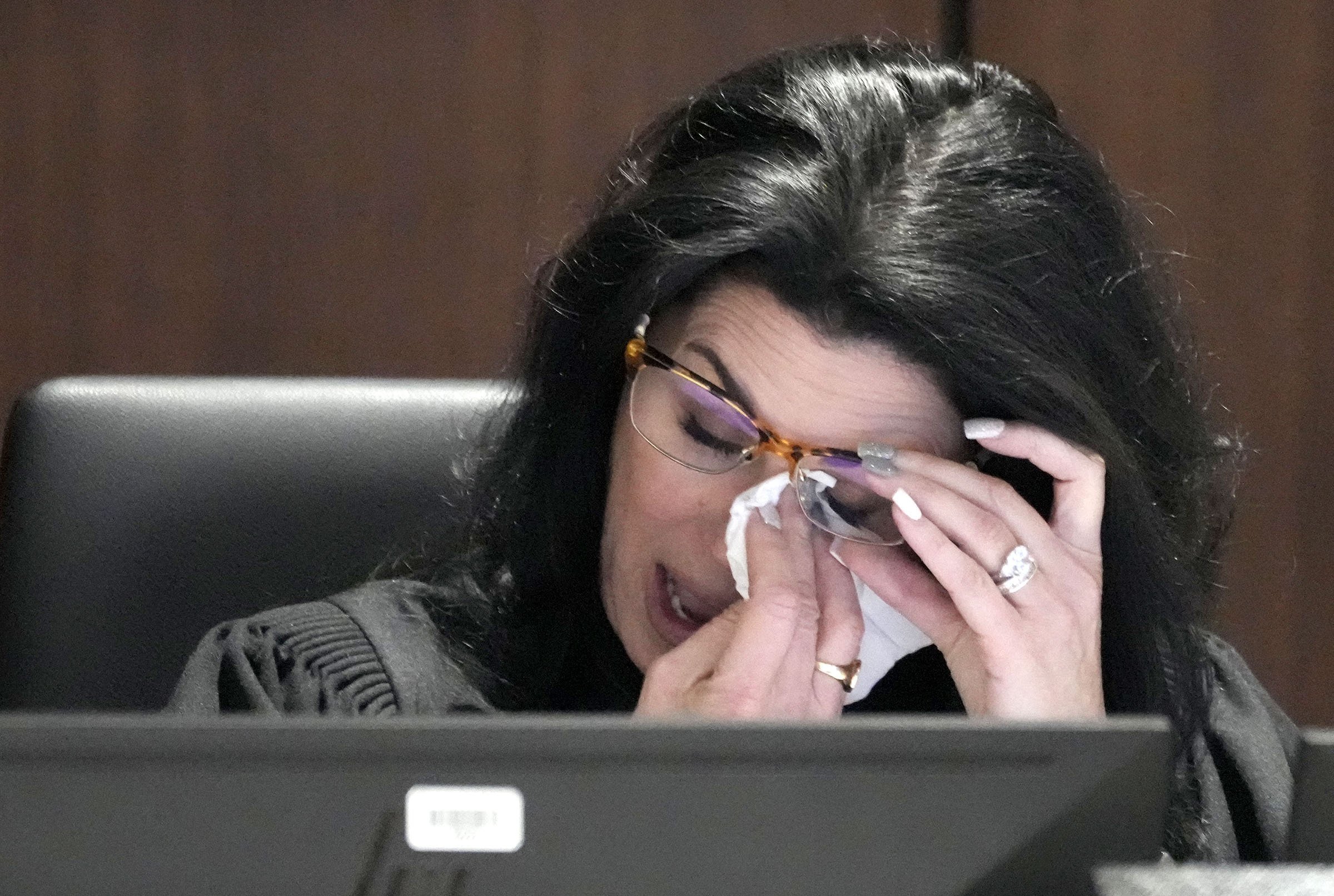 A court judge broke down in tears during the sentencing of a man who killed six people by driving into them at a Christmas parade.

Jennifer Dorow described the case of Darrell Brooks as being ‘unlike anything that I have ever been a part of’ adding that it was ‘heart-wrenching.

Brooks was given six life sentences for each of the people he killed plus another symbolic 1,067 years. He will not have the possibility of parole.

Judge Dorow said: ‘It is clear the state had overwhelming evidence of Mr Brooks’s guilt. What’s also aggravating is his complete and utter lack of remorse.’

Another 62 people were injured.

The judge said the sentence was decided based on three factors: punishment, protection of the community, and ‘what I hope is justice and closure for the families and communities at large.’

The courtroom erupted into applause when Dorow read out the life sentences for each victim killed.

Before his sentencing, a number of victims and their families took the stand to testify about the events of that tragic day and confront that man that was found guilty on October 26.

‘I feel gutted and broken. It hurts to breathe sometimes,’ said Sheri Sparks, the mother of 6-year-old victim Jackson Sparks. He had been marching in the parade with his baseball team.

Cameras caught Brooks rolling his eyes while victim Jason Peckloff said ‘I almost lost the chance to see my wife and kids again.’

Shortly after the testimonials began, Brooks began looking down and reading from a Bible he brought into the courtroom. As victims spoke about the carnage at the parade, Brooks was seen paging through the book and reading lines.

One victim called out this behavior.

‘I do hope that Mr Brooks will use the Bible for more than a courtroom prop. He may want to start with the basics that I know his family has taught him: thou shalt not kill,’ the victim said. ‘Your honor, I hope you give him the time to read and study the Bible.’

In his turn to address the court on Wednesday, Brooks seemed to apologize for the attack.

However, he also stopped short of taking blame for the incident. ‘What happened on November 21 2021 was NOT, NOT, NOT an attack. It was not planned, plotted,’ Brooks insisted. ‘This was not an attack. This was not an intentional act.’

Brooks also apologized for his erratic courtroom behavior, which included hiding behind a box fort, falling asleep, and taking off his clothes. He blamed the outbursts on his ongoing mental health issues.

During the rest of his rambling speech, which went on for over two hours, Brooks spoke about his faith in Christianity, his family, and receiving fan mail and hate mail from people viewing the trial online.

He began crying when he brought up mothers of his children and his youngest daughter, Missy, who he called ‘a light in my life.’ He also spoke about his youngest son, who was born in June while he was already behind bars.

He also expressed anger at District Attorney Sue Opper, at one point telling her ‘I don’t believe you’re that bright.’

Before handing down her sentence, Judge Dorow read three expert reports determining that Brooks could not plead not guilty by reason of insanity.

‘There is no doubt that in our criminal justice system we face a crises of the mentally ill intersecting in our courts,’ the judge said. ‘Do the mentally ill sometimes commit atrocious crimes? They do. This is not one of those situations.’

Dorow said Brooks is ‘fueled by anger and rage,’ and that childhood trauma and physical abuse did not make him drive into the Christmas parade in November 2021.

Before Dorow could finish her remarks, Brooks began growing angry. As he began yelling over the judge, Dorow removed him to a separate court room once again.

‘He had absolutely no intention of stopping his tirade, and this court needs to go through its remarks uninterrupted,’ Dorow said as she called the court back in session.

Dorow brought Brooks back in so that he could hear his sentence, but as soon as he was brought back he blew up again. After arguing with the judge for another few minutes, Dorow sent him out one last time.

After Brooks was out of the room, Dorow criticized his remarks and conduct at the trial.

‘The seriousness of the offense can be summed up in one word – and that is attack. There is no other word that can best describe what happened on November 21, 2021.’

She continued: ‘We may never know the true why, but we were provided with nothing here today but a feeble attempt to blame mental health, which does a true disservice to those suffering from mental health issues,’ she said.

‘I searched for mitigating factors. I waited patiently for an apology. I didn’t get it.’