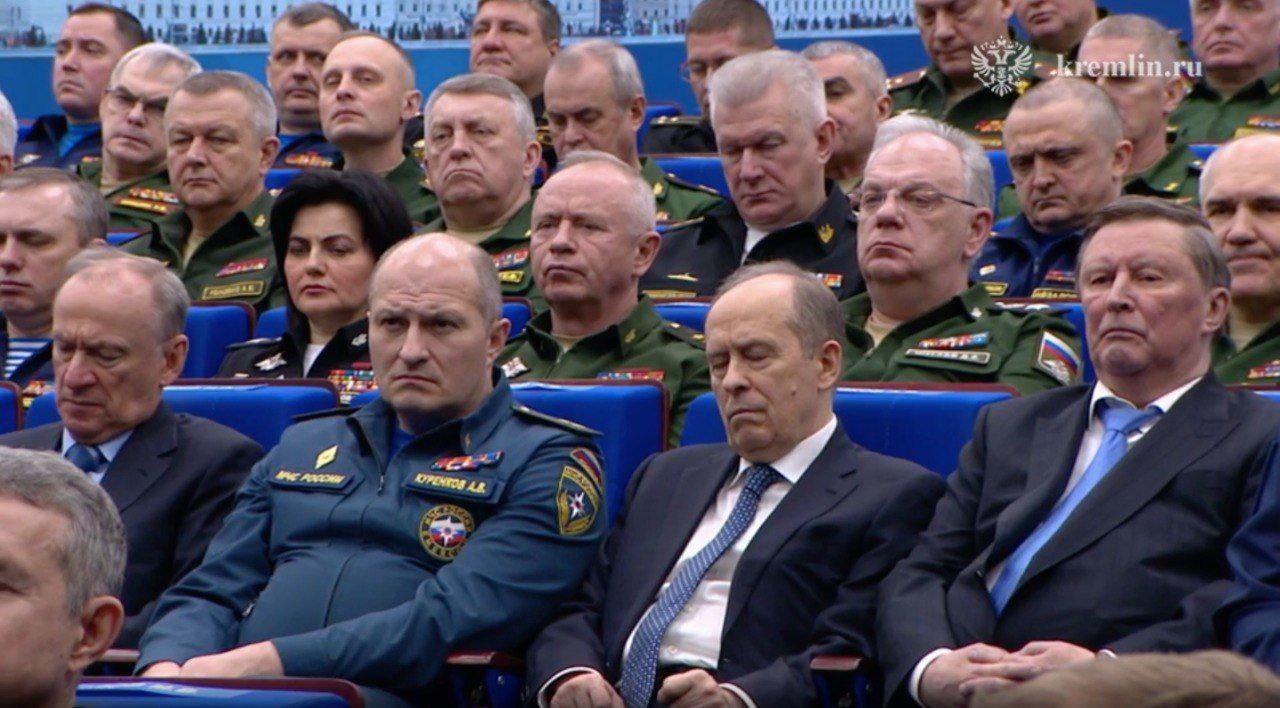 Vladimir Putin’s latest attempt to convince the Russian people he is firmly in control of the Ukraine war didn’t go completely to plan, with several of his military top brass appearing to nod off.

During a televised address to defence chiefs in Moscow, he once again accused the West of provoking the conflict as part of a centuries-long efforts to weaken and eventually break up Russia.

The rhetoric has been consistently rejected by Kyiv and its allies.

Putin said he still considered Ukrainians – who have been killed in their tens of thousands, forced to flee in their millions, and seen whole towns and cities reduced to rubble – to be a ‘brotherly’ people.

‘What’s going on is certainly a tragedy but it’s not a result of our policy,’ he went on.

‘For centuries, our strategic adversaries have been setting the goal to disintegrate and weaken our country… viewing it as too big and posing a potential threat.’

He vowed to press on with what he still calls a ‘special military operation’, saying: ‘I don’t have any doubt that all the goals set will be achieved.’

Several of his top commanders could be seen with their eyes shut and head tilted either forwards or to one side during the address – some might argue deep in concentration, others may say fast asleep.

Putin also said the Russian army must learn from and fix the problems it has experienced in Ukraine and promised to give the military whatever it needs to see the war through.

He added: ‘We have no funding restrictions. The country and the government are providing everything that the army asks for.’

That includes the dreaded ‘Satan II’ hypersonic missile – capable of carrying at least 10 nuclear warheads – which he said will be ready for deployment soon.

Defence Minister Sergei Shoigu also read out a report in which he said Russia’s forces were actively destroying Ukraine’s military potential and accused the West of trying to ‘drag out’ the conflict.

He proposed raising the age for mandatory Russian military service to a new range of 21 to 30, compared to 18 to 27 currently.

Russia last publicly disclosed its losses on September 21, saying 5,937 soldiers had been killed.

That number is far below most international estimates.

The United States’ top general estimated on November 9 that more than 100,000 soldiers had been killed or wounded on each side.