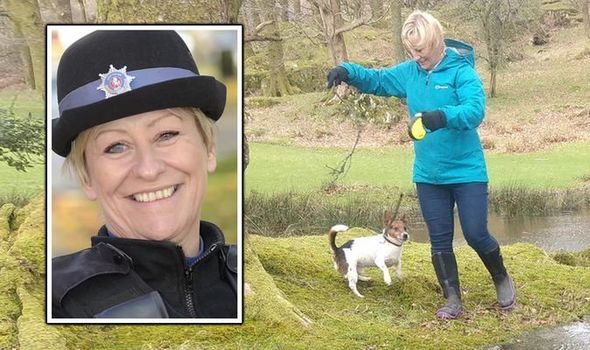 The mother-of-two and grandmother can be seen in the snap playing with her beloved Jack Russell Toby, who was found next to her body in a woodland in Kent last Tuesday afternoon. The officer, 53, suffered serious head injuries in an attack near her family home in the village of Snowdown, while her dog was found uninjured. Assistant Chief Constable of Kent Police Tom Richards has said detectives investigating the murder are still not aware of a motive and have not made any arrests.

Speaking eight days after the incident, he told a press conference he is keeping “an open mind”, adding: “I do not know the motive of this attack. I do not know if it’s somebody she knew.

“I do not know if it’s a stranger attack, of course that possibility is particularly frightening to local residents.”

And he appealed to people who were in the location on Monday, Tuesday or Wednesday of last week to come forward and speak to officers.

“If anybody has got any concerns, any suspicions, we really want to hear about it.”

ACC Richards described the case as “a hugely challenging investigation” and said the “most experienced investigators” have been assigned to work on it.

He added: “Of course in many, many such investigations we have a suspect right from the outset or very, very early on.”

Speaking at Folkestone Police Station on Wednesday afternoon, he said officers were retaining an “open mind” and “looking at every single possibility” as a motive.

He added: “I think the public are one of our most important assets in this investigation.

“They’ve been absolutely fantastic in their support, but I do need that to continue.

“I’m hoping the picture we’ve released today might just spark a memory in someone.”