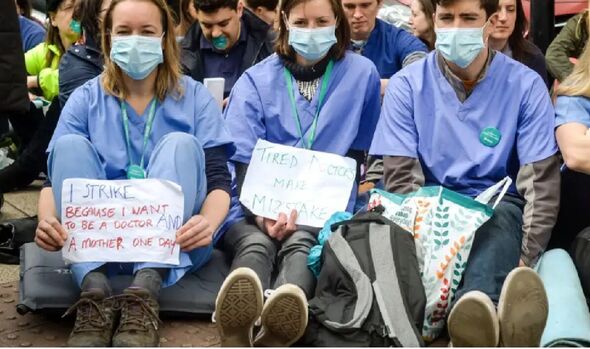 The union representing the junior doctors, the Hospital Consultants and Specialists Association (HCSA), held a ballot that had a 74 percent turnout.

Members of the British Medical Association (BMA), of which 45,000 are junior doctors, have also been balloted for potential strike action. The result of the vote will come at the end of next month.

HCSA president Dr Naru Narayanan sent a warning shot to the Government, saying this latest strike action should be a “wake-up call”.

She said: “The Government must see this result as a wake-up call from its current complacency.

“This is a critical issue for our NHS.

“If the Government does not increase pay as part of a wider funding package, then the current ragged workforce will collapse and the hospital consultants of the future will vote with their feet and leave.

“We are teetering on the edge of a precipice. Now is the time to negotiate a way out of this crisis.”

The Government has released a statement saying it is “disappointed” by the junior doctors’ decision, coming at a time when the NHS is “already under huge pressure”.

A Department of Health and Social Care spokesman said: “Junior doctors do an incredible job and it is disappointing some union members have voted for strike action at a time when the NHS is already under huge pressure from Covid, flu and tackling the backlog.

“Junior doctors’ pay will increase by a cumulative 8.2% by March 2023 as part of a multi-year pay deal which also invested an additional £90 million to provide the most experienced junior doctors with higher pay, increase allowances for those working the most frequently at weekends, and increase rates of pay for night shifts.

“The Health and Social Care Secretary met with medical unions last week for constructive discussions about the 2023/24 pay review process – recognising cost of living and workforce pressures – and was clear he is keen to continue talking.”

Nurses walked out on Wednesday and Thursday this week as they too find themselves embroiled in a pay dispute.

Health Secretary Steve Barclay ruled out a 10 percent pay rise for nurses this week, saying it is “unaffordable”.

Unite announced on Thursday that ambulance drivers from England, Wales and Northern Ireland will go on strike again.

The union’s General Secretary Sharon Graham said staff were “fighting for the NHS”.

She told the BBC Political Thinking Podcast: “People are dying as we speak because of waiting times and the clogging up of the NHS.”