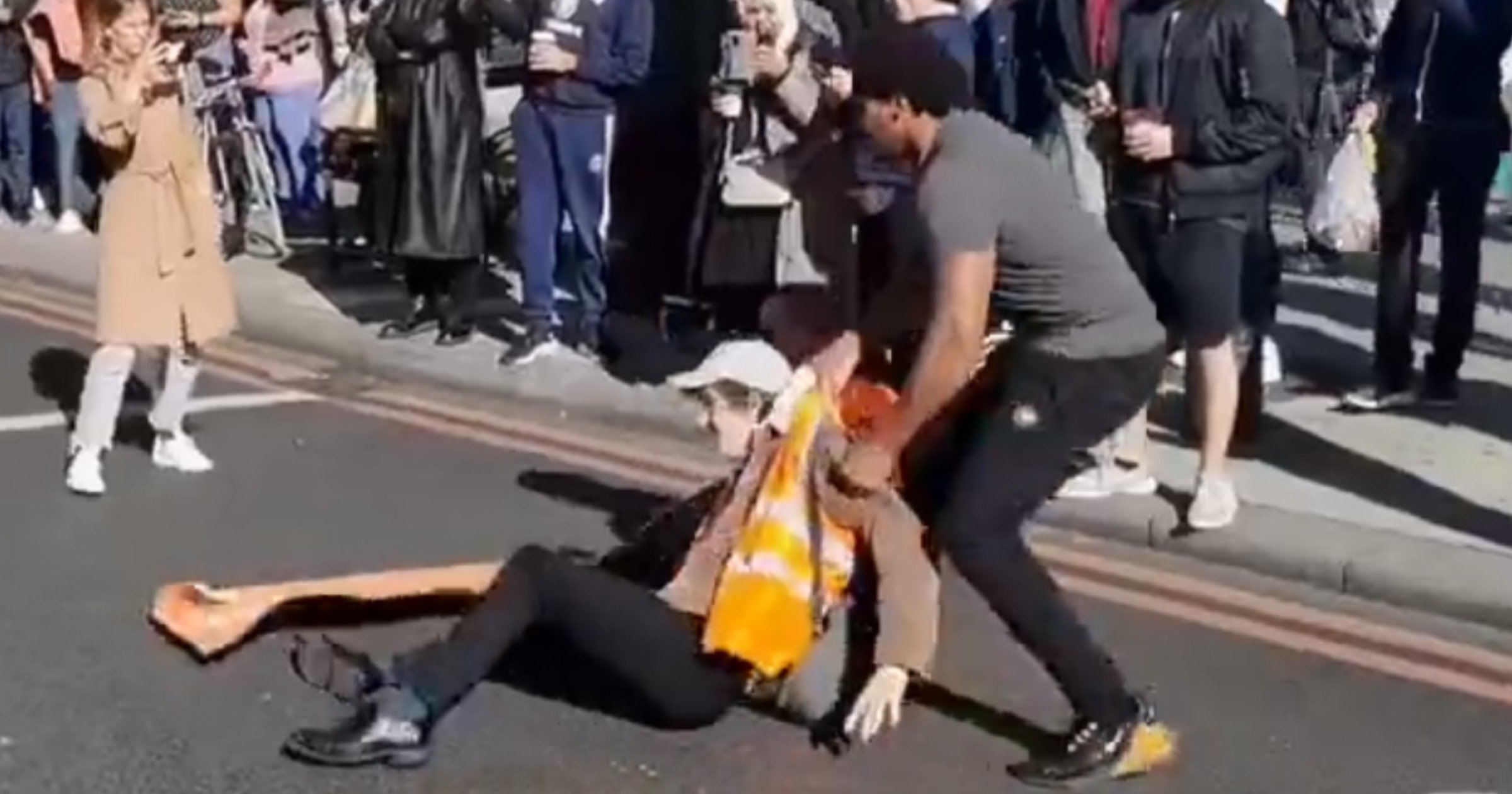 A Just Stop Oil protester had to be given ‘emergency medical treatment’ after being dragged across the road by a member of the public.

The environmental protest group have been blocking roads in central London as part of a renewed campaign to put pressure on the government to take action on the climate crisis.

Video shows furious drivers manhandling demonstrators in the road yesterday – with the group vowing to continue its action until the end of the month.

The activists, who back peaceful protest, did not respond to the pushing and dragging captured on camera, nine days into their campaign.

One van driver accelerated towards the activists sat in the road, before stopping, getting out, dragging them out of the road and driving off.

The activists then returned to the road but it is unclear if any of those involved was the one requiring urgent attention.

Police said earlier today that 45 arrests have been made so far.

In a tweet, the campaign group said: ‘Yesterday, a group of Just Stop Oil supporters remained resolutely nonviolent when confronted by the understandably frustrated members of the public.

‘One supporter required emergency medical treatment due to having been removed from the road by a member of the public.’

The extent of their injuries and whether they had to go to hospital is unclear.

Just Stop Oil continued: ‘The disruption will end when the Government makes a statement that it will halt all future licensing and consents for the exploration, development and production of fossil fuels in the UK.

‘Meet at 11 am outside Downing St. every day of October to Occupy Westminster.’

The latest campaign comes amid increasingly dire warnings about the state of the climate and extreme weather across the globe.

But the group are far from the first to employ the tactic of blocking traffic.

Insulate Britain – who were calling for better insulation around the country to reduce energy bills long before the cost-of-living crisis – and Extinction Rebellion have also held similar demonstrations.

Just Stop Oil activists, who were blocking a road on Park Lane yesterday, want to stop future gas and oil projects from proceeding.

Angry drivers were also seen dragging protesters from the roads surrounding Westminster, near the House of Parliament, where activists had been stopping traffic

Today those protests continued in other parts of central London.

The Metropolitan Police said in a tweet: ‘So far today, a total of 45 people have been arrested for wilful obstruction of the highway in connection with Just Stop Oil protests in Piccadilly.

‘They have been taken into custody.’

Campaigners poured red paint inside Farlows, a hunting and fishing shop on Pall Mall, and daubed paint on the windows of William Evans, a shooting supply shop in nearby St James’s Street, while others took and emptied milk from supermarkets.

The group, an offshoot of Extinction Rebellion, describes itself as a ‘mass movement using non-violent civil disobedience to call for a just, sustainable plant-based food system’.

Experts are in widespread agreement that meat and dairy products are environmentally damaging.

The group targeted Fortnum & Mason and Selfridges in central London by pouring milk over the high-end department stores on Friday.

A man and woman accused of stealing milk and damaging two shops have been charged and are to appear in court.

Stephen Bone, 40, of Clacton-on-Sea, Essex, and Sofia Fernandes Pontes, 26, of Copenhagen Street, Islington, north London, were both charged in the early hours of Sunday with two counts of criminal damage and two counts of theft.

A Government spokesperson said of the AR protests: ‘The right to protest is a fundamental principle of our democracy, but actions of this nature do not encourage sensible debate.

‘We are supporting our Great British farmers to ensure that well-managed livestock provides environmental benefits such as supporting biodiversity, protecting the character of the countryside and generating important income for rural communities.’