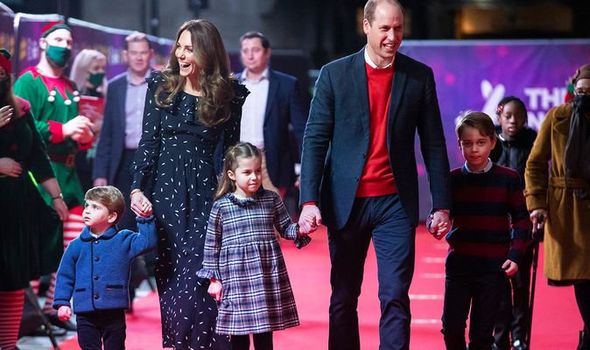 Prince George, Princess Charlotte and Prince Louis are being “drilled” to be well-behaved in public so the actions become “automatic”. The three rarely misbehave in public – necessary for members of the Royal Family who spend a great deal of their life under the spotlight.

One strategy that William appears to have learned from his mother is to get them to write thank-you notes to any who helped them.

A source told MyLondon: “[William and Kate] have developed this brilliant knack of letting as much as they can seem spontaneous and that’s how the children see it.

“Table manners, thank you letters, little courtesies are being drilled into the children so they become automatic.”

Princess Diana often took her children on days out as she wanted them to experience life without too much royal restriction.

But she also had a method of getting Prince William and Prince Harry to write thank-you letters as a way to keep them in line.

Diana’s biographer, Andrew Morton, said: “She took the young royals with her on her private charity visits from a young age.

“One of the reasons was she didn’t want the boys to grow up thinking the whole world was 4×4 Range Rovers, shotguns and nannies.”

Her method of getting William and Harry to write thank-you letters was remembered by their former protection officer, Ken Wharfe.

On one occasion, when Prince Harry was a small child, he wanted to take public transport.

DON’T MISS
Why UK won’t stand down in EU row – and could trigger Article 16 soon [ANALYSIS]
EU ‘drawing up’ new Brexit punishment plans [INSIGHT]
Brexit LIVE: Victory! Macron to back down on fishing over fears [REPORT]

They hopped on the tube at South Kensington and got off at Piccadilly.

They then took the number 38 bus and, according to Mr Wharfe, the young prince was far from well-behaved.

As they prepared to get off the bus, Harry turned around to the driver and shouted: “Parp, parp, ring, ring.”

Mr Wharfe said that Diana had been furious and made Harry apologise to the driver.

The bodyguard added that the following day he found a thank you letter on his desk from Harry.

Wharfe said that the prince’s note thanked him for having a normal day out.

But Harry had also signed the note with the same “parp, parp, ring, ring” that had landed gotten him in trouble in the first place.