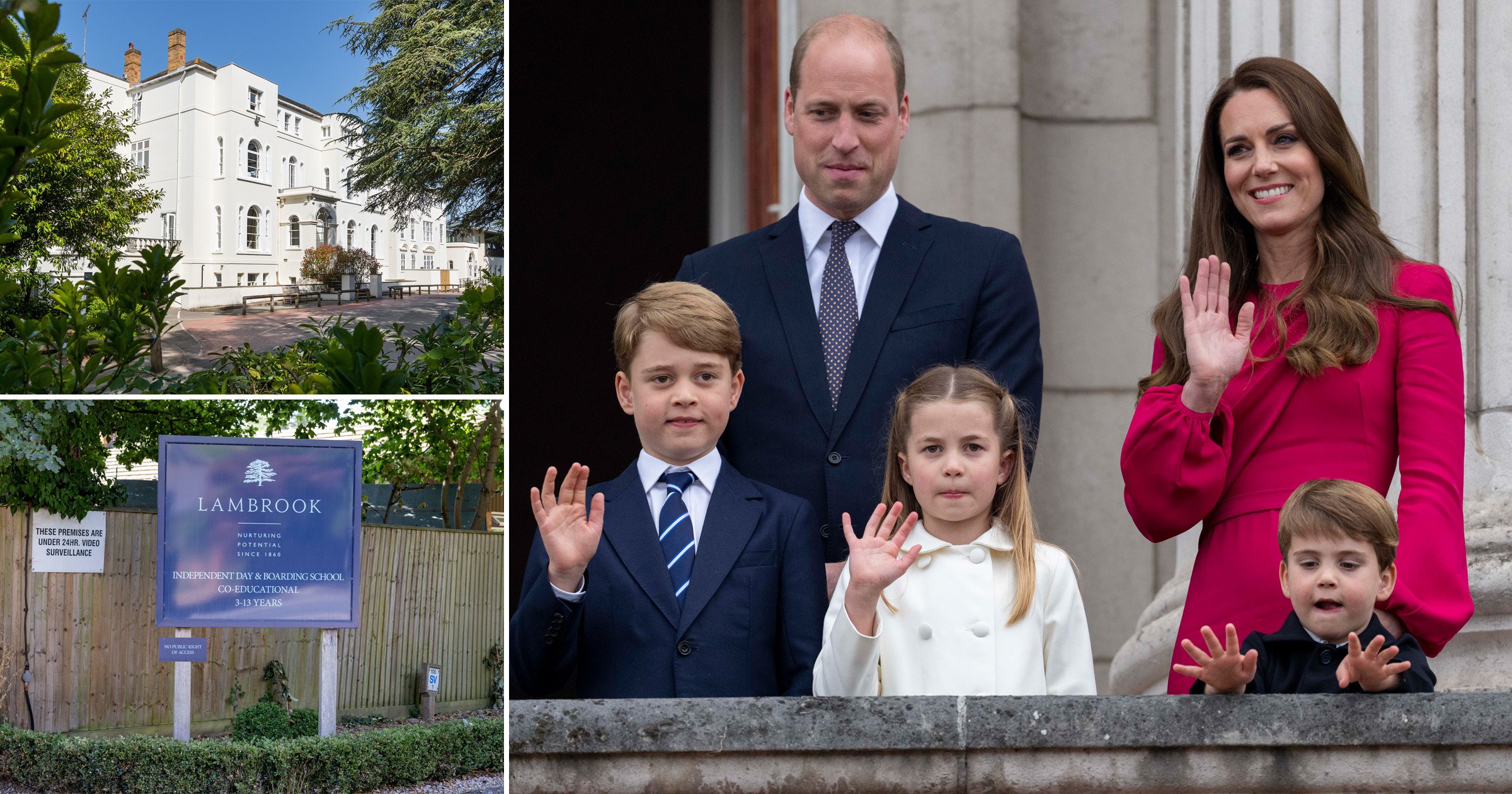 Prince William and Kate Middleton are sending their three children to a new school as they all move much closer to the Queen.

George, Charlotte and Louis will start at the private Lambrook School near Ascot in September.

It is all part of the Cambridge’s big move away from Kensington Palace in west London to Windsor, where they are setting up home in Adelaide Cottage.

The two older children were at Thomas’s prep school in Battersea, but will start afresh with Louis at Lambrook.

Lambrook has 52 acres of grounds and will cost William and Kate in excess of £50,000 in fees a year.

Adelaide Cottage is just a 10-minute walk from Windsor Castle in the private Home Park.

A royal source said it is hoped the move will give their children the ‘most normal’ start possible.

‘KP can be a little bit of a fishbowl,’ they added. ‘They wanted to be able to give George, Charlotte and Louis a bit more freedom than they have living in central London.

‘It’s very much a decision that’s been led by the kids.’

Despite leaving the capital behind, William and Kate are keeping their apartment in Kensington Palace, which was refurbished with £4.5 million of taxpayers’ money in 2013.

It will remain the family’s official residence and working base for their office staff.

They will also keep their 10-bedroom Norfolk country mansion Anmer Hall, which was a gift from the Queen.

It has a swimming pool and tennis court and underwent large-scale building work at their own cost.

Other staff, including the housekeeper and private chef, will also be living off-site.

The source said the duke and duchess were very conscious of how their move stands in contrast to the cost-of-living crisis gripping families across the nation.

‘It’s something they have thought long and hard about and this is a decision they have not taken lightly,’ they added.

‘It would have been extremely difficult for them to continue on as senior working royals if they were based in Norfolk.

‘What they have basically done allows them to put the kids first, but also to continue on doing what they do all day, every day.’

Jonathan Perry, headmaster at Lambrook School, said: ‘We are delighted that Prince George, Princess Charlotte and Prince Louis will be joining us this coming September and very much look forward to welcoming the family, as well as all of our new pupils, to our school community.’

Kensington Palace said: ‘Their Royal Highnesses are hugely grateful to Thomas’s Battersea where George and Charlotte have had a happy start to their education since 2017 and 2019 respectively and are pleased to have found a school for all three of their children which shares a similar ethos and values to Thomas’s.’

A guide to the ‘magical’ Lambrook School

The Good Schools Guide describes Lambrook as a ‘classic prep school’ with a ‘heart of gold’.

It tells of how youngsters ‘run and run’ in the vast grounds with ‘total freedom to explore, provided you’ve got your wellies on’.

Lambrook’s ‘first-class’ teaching and facilities include a 25-metre swimming pool, a nine-hole golf course, an astroturf, hard courts, a squash court, cricket and other sports pitches.

It has a Diamond Jubilee performing arts studio, dance studio and sports hall, and a new £6 million Queen’s Building for ICT and academic learning.

There is school on Saturday mornings followed by an afternoon of sports fixtures for pupils in Year 5 and above, which includes nine-year-old George.

Lambrook offers weekly and flexi-boarding for boys and girls aged seven onwards, giving the Duke and Duchess the option of letting George and Charlotte stay one night a week on an ad-hoc basis, with the sleepovers booked online.

George and Charlotte will be day pupils for now.

‘Weeknights sound like a hoot; think Harry Potter evenings and lashings of hot chocolate,’ Talk Education said in its review of the school.

Fridays are the most popular night for one-off boards, leaving parents free to host dinner parties and nurse hangovers, according to the Telegraph.

William and Kate’s bill amounts to £53,508’s worth of fees in 2021-2022, not factoring in any potential sibling discount if available, fee increases or the cost of uniform and trips.

Boarding for the older two Cambridge children would cost an additional £8,886 a year if chosen at a later date.