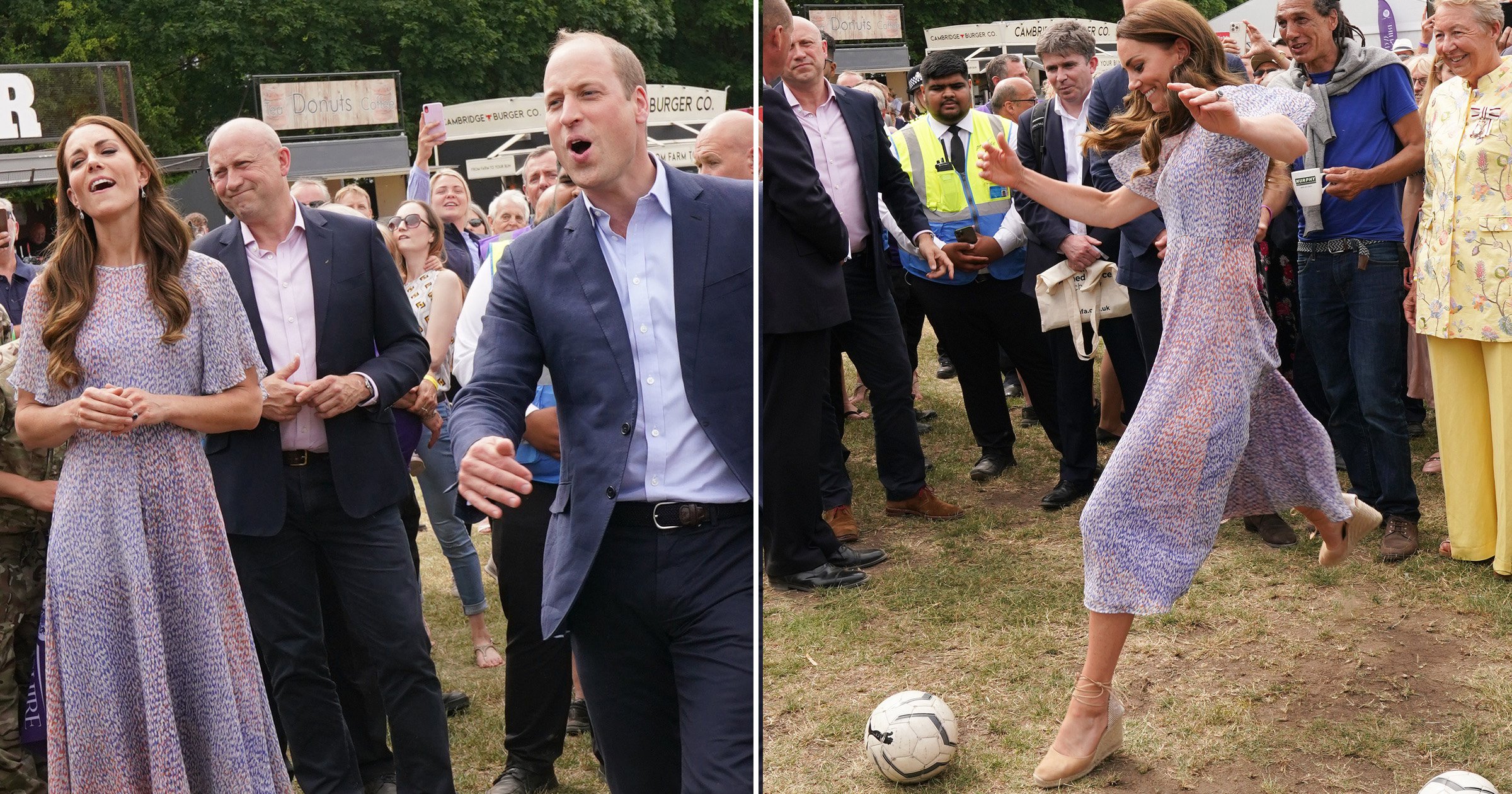 Kate and William have enjoyed a beer and a quick kickabout on a visit to Newmarket Racecourse.

The duke and duchess travelled to the famous horseracing track for the first-ever Cambridgeshire County Day.

The royal couple were greeted by cheers and applause from onlookers before before taking part in a football game where they attempted to kick a ball at a target.

Kate joked with the crowd she may find it difficult as she was ‘wearing wedges’.

Prince William could be seen cheering her on as she took the shot in her platformed shoes.

After taking her turn, the duchess shook the hand of a boy who had been playing before her and said: ‘You did better than I did’.

The couple also sampled chocolate and a Jubilee beer before meeting members of the public while walking around a variety of stalls.

Kate spotted one woman holding a child and asked if she could hold her.

The baby’s mother, Marianne Provoost, who had travelled from the Netherlands to watch the races, said the duchess had asked to hold her child by saying: ‘I love babies’.

Her daughter, four-month-old Norah, was handed back to her, with Ms Provoost telling the duchess: ‘Enjoy your day and enjoy your children’.

Earlier in the day the couple visited the Milton branch of East Anglia’s Children’s Hospices (EACH), which was opened by Diana, Princess of Wales in 1989.

Kate was presented with a bouquet of flowers by 15-year-old Chloe Bowes, who has a neurological condition called bilateral perisylvian polymicrogyria.

The duchess who has been patron of EACH for 10 years, donned a floral face mask as she entered the hospice.

William joined her as they met three families who make use of the charity’s services, including 12-year-old James Hall, who has a genetic connective tissue disorder.

Kate placed her hand on James’s knee as she spoke with his mother, Claire, and his older brother Henry.

The duke and duchess were then greeted by Kirsty and Gary Carlin, whose four-year-old daughter Libby lay sleeping on the floor beside them.

The duke and duchess’ day in Cambridgeshire also saw them pay a surprise visit to Cambridge University’s Fitzwilliam Museum to unveil a newly-commissioned royal portrait.

The dazzling painting is the first of themselves together as a couple.

William is depicted in a black suit with a white shirt and blue tie while Kate is wearing the emerald green Vampire’s Wife gown she wore while on a visit to Ireland in 2020.

The painting, by award-winning artist Jamie Coreth, was commissioned last year as a gift for the people of Cambridgeshire.

It will be on display in the Fitzwilliam Museum for the next three years.