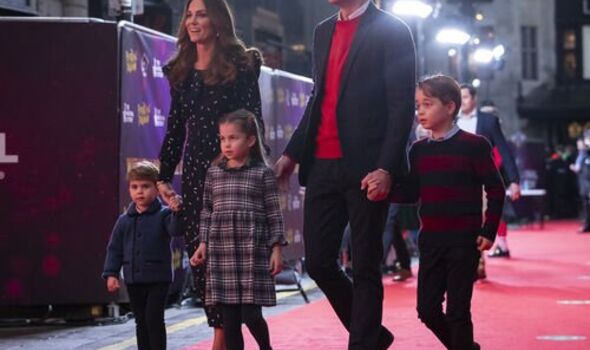 Prince George, eight, Princess Charlotte, six, and Prince Louis, four, are reported to be taking a “visible” part in events to mark Her Majesty’s 70th year on the throne in a “royal show of force”.

The three youngsters may appear in the Trooping the Colour carriage and then on the Buckingham Palace balcony with parents Prince William, 39, and Kate, 40 for the RAF flyover.

But detailed plans for the Royal Family’s attendance on the Jubilee weekend are still being finalised.

William and Kate are likely to follow the pattern they set for the Duke of Edinburgh’s Service of Thanksgiving at Westminster Abbey last month in confirming attendance only at the last minute.

The young trio have previously joined the Duchess at her “back to nature” garden in the Chelsea Flower Show and could make a similar appearance for Kate’s Superbloom project.

The Duke of Cambridge, when aged four, enjoyed his first public carriage ride alongside Princess Diana and the Queen Mother at 1987’s Trooping the Colour.

Traditionally, the Queen heads the procession, inspecting her Household Division at Horse Guards Parade before leading them back to Buckingham Palace.

But for this year’s ceremony on June 2, it is understood William will be taking the lead at the high-profile military event.

Kate will help coordinate Superbloom, involving the Tower of London being flooded with hundreds of flowers and a slide.

Prince Charles will host a bank holiday concert while the Duchess of Cornwall fronts a Big Lunch.

Prince Harry is said to be undecided about whether he, Meghan and their children will attend.

Her Majesty, 96, will undergo fewer engagements than at previous jubilees due to her mobility.

It is understood royal aides are “moving Heaven and Earth” for the Queen to be able to cheer her horses on from the royal box at the Epsom Derby on June 4.

This includes changing the route of her official car so it can draw up directly outside The Queen’s Stand so that she has to walk only a few yards to get a lift to her seat.

A source said: “She really is absolutely determined to attend.”