Perhaps the Royal Family’s biggest tennis fan, Kate, Duchess of Cambridge appeared at Wimbledon today (July 5) dressed in a blue polka-dot dress. But eagle-eyed royal fans may have noticed the addition of a dark green and purple bow, which the Duchess has also been spotted wearing at past tournaments.

Why does Kate, Duchess of Cambridge wear a bow to Wimbledon?

The specific bow Kate wears to Wimbledon is the ribbon of the All England Lawn Tennis & Croquet Club (AELTC).

Female members of the club tend to wear the ribbon, while male members opt to wear a dark green and purple tie.

Kate wears her ribbon in her capacity as Patron of the AELTC, a role she has held for six years. 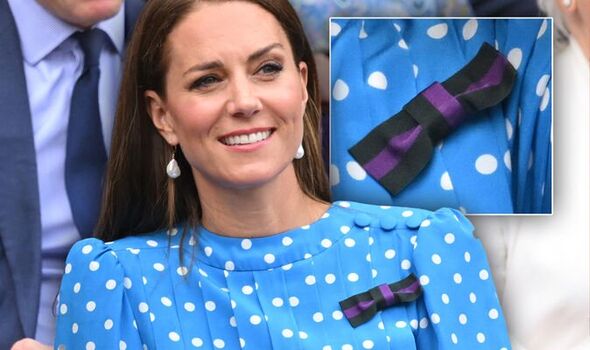 Kate took on the baton from the Queen in 2016, and the monarch held the position for 64 years.

AELTC chairman Philip Brook said at the time: “We would like to thank Her Majesty for her long and unwavering service to The Club and The Championships during her time as our Patron.

“It was a great honor to welcome Her Majesty to Wimbledon in 2010 and we remain immensely proud of her role in the history of The Club and The Championships.”

The Queen handed the trophy to Virginia Wade in 1977 when she won the women’s singles title.

Now the baton often falls to Kate to award trophies to the Wimbledon winners.

In recent years Kate has joined the Queen’s cousin Prince Edward, Duke of Kent, at the sporting fixture.

Edward served as President of the AELTC for more than 50 years but stepped down in 2021.

What do the ribbon colours mean?

The dark green and purple colours of the AELTC ribbon have stayed the same for more than a century, but it isn’t clear why they were chosen.

The AELTC website explains: “The present colours – dark green and purple – were introduced in 1909 following the discovery that the previous Club colours of blue, yellow, red and green were almost identical to those of the Royal Marines.

“The decision as to why dark green and purple were chosen is not stated in the Club’s records.”