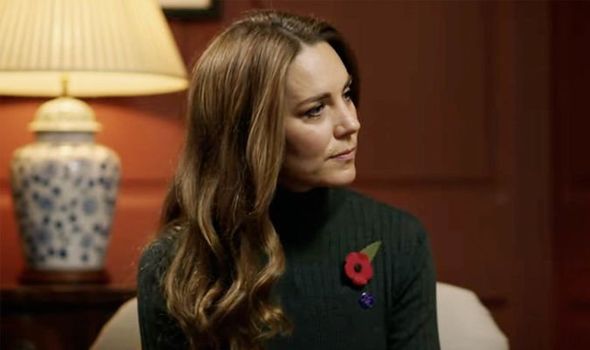 Kate left royal fans moved as she sat down with 98-year-old veteran Colonel Blum and 10-year-old Emily to discuss the importance of Remembrance across generations. The Duchess of Cambridge stunned in a dark green ensemble, which she completed by pinning a red Remembrance poppy on her lapel.

The trio met at the Royal Hospital Chelsea, where Kate learned more about Emily and Colonel Blum – who was also a Scout before taking part in World War 2.

Kate was left visibly saddened when hearing how Colonel Blum lost a friend in conflict just two days before the war ended.

Asked why Remembrance is so important to him, he said: “I have to say I lost a few friends.

“One in particular I remember, he was killed a day or two before the war ended.

“That I must say affected me quite a bit.

Kate asked: “This time of the year, is it lovely for you to reflect on not only the time that you served but also on your friends and loved ones that you sadly lost?”

The Duchess, who earlier this year became co-president of the Scout Association, was positively surprised to learn just how much Emily learned about Remembrance, the world conflicts and life in Britain during them.

Kate, an amateur photographer, then asked to see some of the pictures brought by Colonel Blum.

She enthusiastically said: “Colonel, I’d love to see some of these photographs!”

Colonel Blum went on showing a portrait of himself aged 18 and another with his wife, who sadly died 18 years ago.

They then looked at pictures taken during WW2 showing the various roles covered by the Scouts to help Britons evacuate and look out for danger.

During their chat, Emily poignantly asked Colonel Blum why he thinks remembering is so important also for children.

He replied: “I think they should remember what their parents and their grandparents did, because otherwise it’s gone, it’s lost.”

Kate and Colonel Blum were later taught by Emily how to make a red Remembrance poppy.

Commenting on her handmade poppy, Kate said: “Emily, yours is far more beautiful than mine.”

Flattered, the 10-year-old replied: “Yours is really nice asa well.”