Alongside Kate at the ceremony, were Prince William, Prince Harry and Meghan Markle. Body language expert Katia Loisel shared insights into what she thinks the four royals were feeling during the service.

She told 7News that William and his wife, Kate, looked “highly distressed” as they struggled to “hold it together” during the painful procession.

Meanwhile, Harry and Meghan, who were holding hands during the service, showed that they have a “desire to connect and be close to one another”.

The newly-appointed Prince and Princess of Wales’ lowered heads, furrowed brows and tightly compressed lips showed that the couple were trying to hold in tears throughout the service.

Ms Loisel said: “The more pronounced the lip compression, as is the case with Prince William – his lips pressed together, rolling inwards until they have completely disappeared – indicate extreme levels of discomfort and stress”. 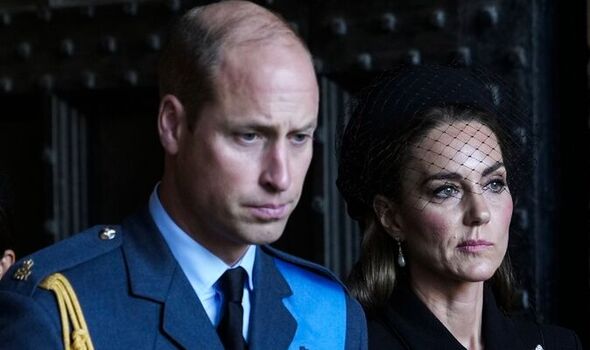 She analysed one photo from the day, which showed William and Kate looking miserable, while Harry and Meghan, standing behind them, looked at one another offering an “interesting non-verbal perspective”.

“In contrast, clearly grief-stricken and lost in their own thoughts, Prince William and Princess Kate keep a formal distance, in keeping with the formality and seriousness of the event, and Prince William’s position as heir to the throne.”

The distance between Kate and William, and closeness between Harry and Meghan showed the differences between the two couples, she said. 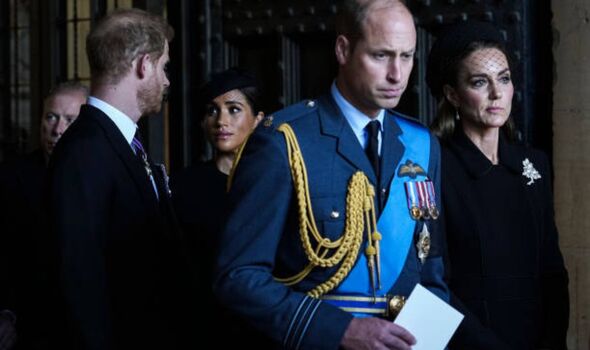 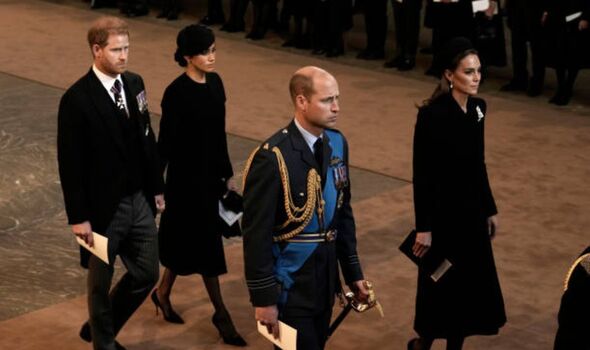 She said Kate and William stood apart, which is “reflective of their roles and the seriousness of the occasion”.

The Princess of Wales looked particularly distressed, with downcast eyes and slightly compressed lips, as she swallowed and rapidly blinked, which suggested she was “on the verge of tears”, the expert noted.

Similar to his wife, William looked forlorn with his eyebrows pulled together, upper lids droopy, lips compressed and corners of the mouth lowered.

Ms Loisel observed the closeness between Harry and Meghan, who she described as an “affectionate and tactile couple”, as they reconnected to hold hands after leaving the procession. 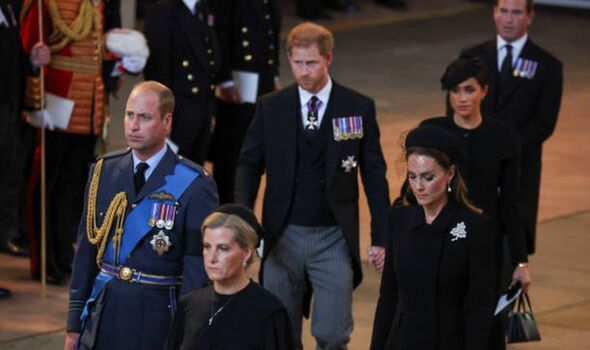 As they joined hands, the couple were “non-verbally seeking each other out” which showed a “desire to connect and be close to one another”, the body language expert claimed.

She said the affectionate gesture was an attempt to reduce stress and provide “support and reassurance” to one another.

Meanwhile, the Duke of Sussex showed obvious signs of distress during the service but looked “visibly more relaxed” when reconnecting with his wife.

It is the second time the two couples have appeared together in public, since the passing of the Queen on Thursday, September 8.

The previously dubbed “fab four” also appeared together when greeting mourners outside the gates of Windsor Castle last week.