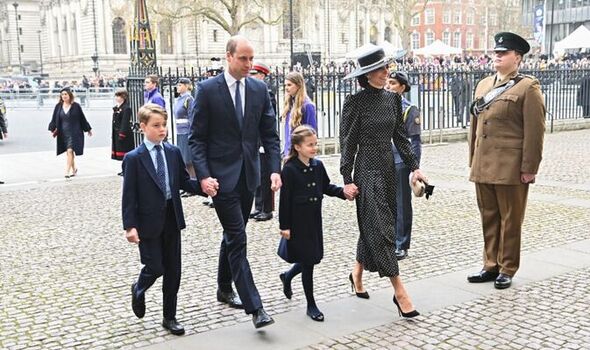 After widespread speculation over whether or not she would attend the service, the Duke and Duchess of Cambridge have shown up to accompany Her Majesty, 95, as the Firm reflects on the life of the Duke of Edinburgh close to a year after he died on April 9, 2021. While the monarch has significantly scaled back her public appearances in recent months, Prince William, 39, and Kate, 40, have done the opposite.

The couple has just returned from their eight-day tour of the Caribbean, travelling from Belize and Jamaica to the Bahamas.

The Duke and Duchess of Cambridge were among the last members of the Royal Family to arrive at Westminster Abbey for the service.

Prince George, eight, and Princess Charlotte, six, accompanied their parents as they made their way to their seats.

They followed Prince Charles, 73, and Camilla, Duchess of Cornwall, as they made their entrance.

The Queen, 95, was last to arrive via a separate entrance to the Abbey.

Her Majesty entered the venue through a side entrance beside Poets’ Corner in Westminster.

She was helped to her place by her son, Prince Andrew.

She appeared stoic in a smart dark green outfit, taking her seat just slightly apart from her son, the Prince of Wales.

She settled in one of the two Canada Chairs always used by the sovereign, or the most senior royal in attendance at an event, at Westminster Abbey.

The Service aims give thanks for His Royal Highness’s dedication to his family, to the Nation and to the Commonwealth as both Consort to Queen and a working member of the Royal Family in his own right”, a Palace statement said ahead of the service.

Due to the coronavirus measures in place at the time, just 30 people were permitted to attend the funeral for the Duke of Edinburgh last year.

The service on Tuesday was opened with an address by the Very Reverend Dr David Hoyle, Dean of Westminster.

He called the late Duke “a man of rare ability and distinction, rightly honoured and celebrated, he ever-directed our attention away from himself”.

He continued: “He put privilege to work and understood his rank as a spur to service.

“Working at pace, with so many claims on his attention, he encouraged us to focus, as he was focussed, on the things that matter.”