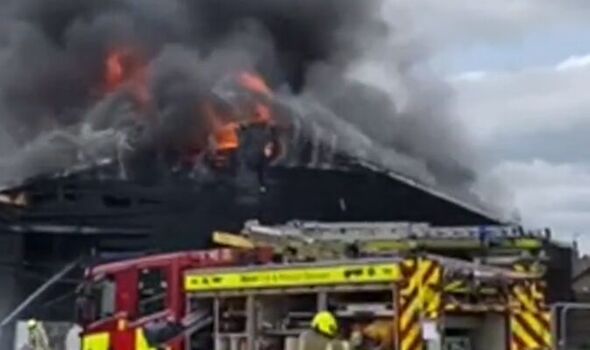 Ten fire engines were dispatched to the scene in Whitstable Harbour, with fire crews making “steady progress” to extinguish the blaze.

Thick smoke can be seen rising from the scene, with several public transport services diverted in the area.

Local residents have been advised to stay away from the immediate vicinity and keep all doors and windows shut.

The blaze broke out in the seaside town around 1.30pm, KentOnline reports.

KentOnline reporter Lydia Chantler-Hicks told the local outlet that the heat of the flames could be felt at a distance of 100ft.

She said: “Crews are using jets of water but it doesn’t seem to be having any effect.”

“It’s a timber building and is burning so hot.

“Pieces of timber are falling down.

“Wind is blowing the fire in the direction of the South Quay Shed.”

The South Quay Shed houses a number of local businesses, including newly-opened eateries.

The centre, which includes a bar operated by the local council only opened for business for the first time earlier this week.

“Ten fire engines and a height vehicle are in attendance, and crews are making steady progress, using hose reel jets and compressed air foam to tackle the fire.

“Anyone living or working nearby is still advised to keep windows and doors closed as a precaution due to smoke, and to avoid the area where possible while the emergency services deal with the incident.