Kevin Haughton, 70, said the huge pole made it difficult to get past and ridiculed the placing as “idiocy”. After complaining to BT Openreach, bosses agreed to move the pole a few weeks later, reinstalling it nearly 10ft away. The former policeman called the move a “victory for common sense”.

Mr Haughton, of Sutton Coldfield, West Midlands, said: “Openreach had been laying a cable in the area.

“They arrived with a lorry full of poles and started digging. I didn’t think twice and didn’t take any notice.

“But, some hours later, when I drove off from my house I saw the full scale of the pole.

“They had put it at the end of a path and near the top of the steps. Anyone would have struggled to get past it.

“As soon as I saw it I thought it was ridiculous, it looked out of place. I don’t mind having a telegraph pole as you have to put them somewhere. 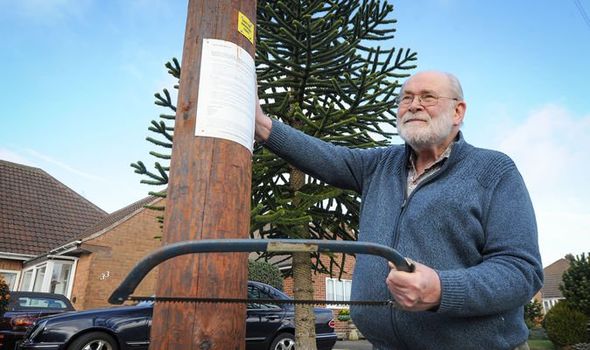 “But in the position it was in, it was just ridiculous. I thought it was comical. It’s so obviously not a good place to put a telegraph pole. When they finally removed it, it was a victory for common sense.

“They’ve moved it three metres up the road in a northerly direction. They shouldn’t have put it in a stupid place in the first instance.”

Mr Haughton’s sister Lesley, 66, said: “When I first saw it I couldn’t really believe that they had done it, it seemed mad. They certainly didn’t seem to be thinking about what they were doing, we’re pleased it’s been resolved.”

An Openreach spokesman said: “We understand how frustrating this must be and we’ve arranged for the pole to be moved to the side of the footpath.

“We are sorry for this oversight and will make sure we review how it happened.”