Republican Kevin McCarthy has been elected as the new House speaker on a historic early-hours ballot after tense and chaotic scenes in Congress.

The 57-year-old Californian suffered one final humiliation when Representative Matt Gaetz withheld his vote on the 14th ballot as midnight approached.

McCarthy’s victory in the 15th round brought an end to the deepest congressional dysfunction in more 160 years.

But it sharply illustrated the difficulties that he will face in leading a narrow and deeply polarized majority. McCarthy won at last on a slim margin of 216-212.

He was able to be elected with the votes of fewer than half the House members only because six in his own party withheld their votes – not backing him as leader, but also not voting for another contender.

‘My father always told me, it’s not how you start, it’s how you finish,’ McCarthy told cheering fellow Republicans.

President Joe Biden congratulated him on his success and said he is ‘prepared to work with Republicans’ when he can.

But the Californian promised subpoenas and investigations, declaring: ‘Now the hard work begins.’

Republicans roared in celebration when his victory was announced, chanting ‘USA! USA!’ 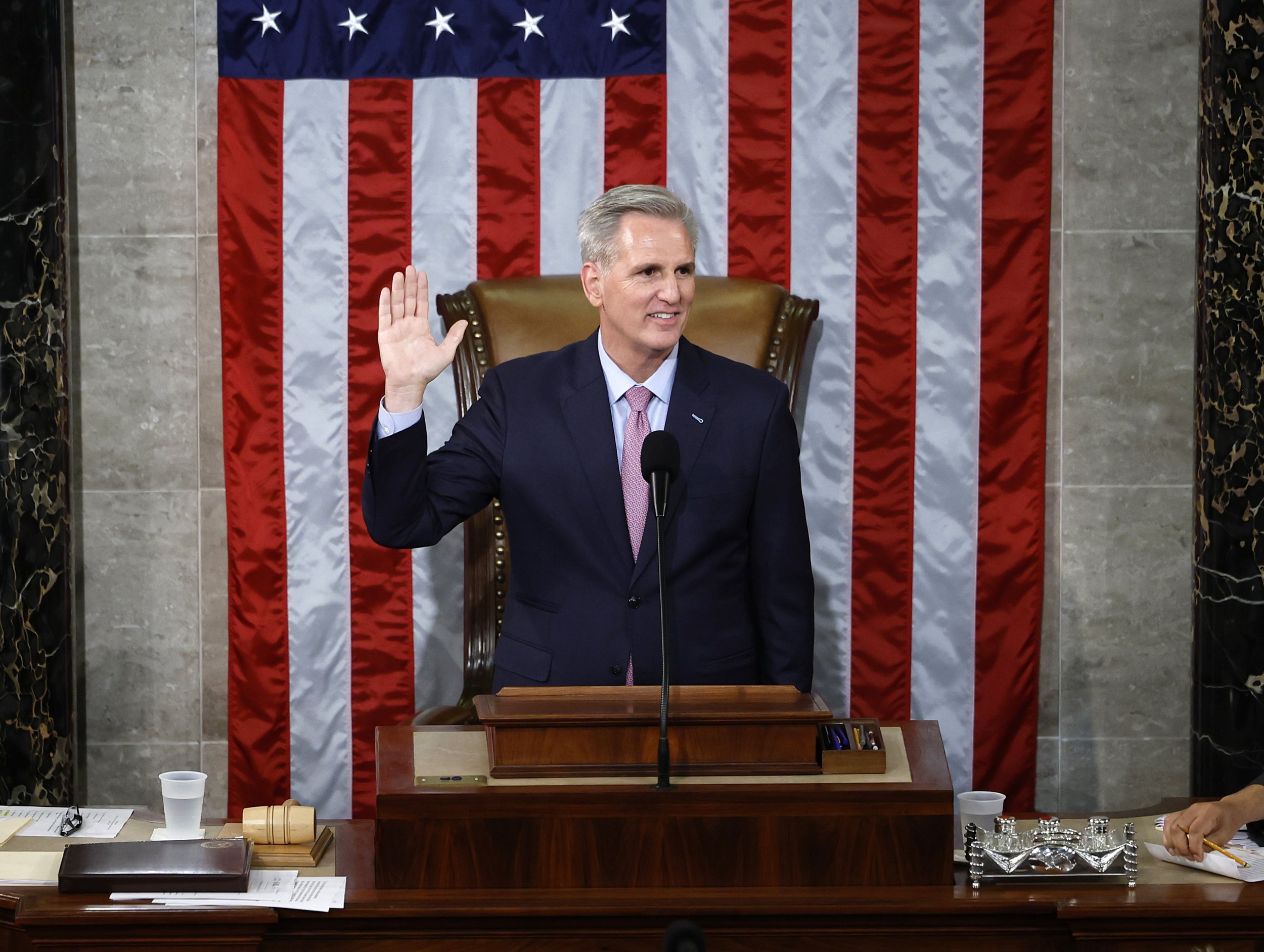 With a speaker elected, McCarthy took the oath of office, and the House was finally able to swear in newly elected lawmakers who had been waiting all week for the chamber to formally open and the 2023/24 session to begin.

After four days of grueling ballots, McCarthy flipped more than a dozen conservative holdouts to become supporters, including the chairman of the chamber’s Freedom Caucus.

He fell one vote short on the 14th ballot, and the chamber became raucous, unruly.

McCarthy strode to the back of the chamber to confront Republican Matt Gaetz, sitting with Lauren Boebert and other holdouts.

At one point, Republican Rep. Mike Rogers of Alabama, shouting, approached Gaetz before another Republican, Richard Hudson, physically pulled him back.

At one point, Republican Marjorie Taylor Greene could be seen waving a mobile phone on a phone call to a person saved as ‘DT’, implied to be former president Donald Trump.

Sharing a photo on her Twitter account, the GOP member from Georgia wrote: ‘It was the perfect phone call.’

Order eventually restored, the Republicans fell in line to give McCarthy the post he had fought so hard to gain, House speaker, second in the line of succession to the presidency.

What started as a political novelty, the first time since 1923 a nominee had not won the gavel on the first vote, has devolved into a bitter Republican Party feud and deepening potential crisis.

Before Friday’s ballots, Democratic leader Jeffries of New York had won the most votes on every ballot but also remained short of a majority. McCarthy ran second, gaining no ground.

The longest fight for the gavel started in late 1855 and dragged on for two months, with 133 ballots, during debates over slavery in the run-up to the Civil War.