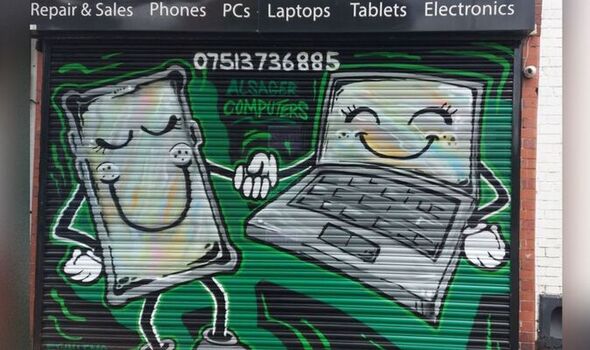 Richard Murrow, who owns Alsager Computers, has been issued an enforcement notice over the shopfront artwork after a complaint was made. The design features a phone and laptop holding hands, along with the shop’s name and phone number.

Richard wanted to brighten up his tired looking shutters, so he brought in the help of a local Stoke-on-Trent artist in May.

However, a planning enforcement officer from Cheshire East Council visited the 40-year-old’s business on Lawton Road and, after inspecting the shopfront, said the artwork “constituted an advertisement”, reports StokeonTrentLive.

Richard, who originally started his business in 2006 and moved to the current premises in 2019, received a letter last week giving him the options of applying for advertisement consent (though this is unlikely to be granted), removal of the artwork altogether or face possible enforcement action. 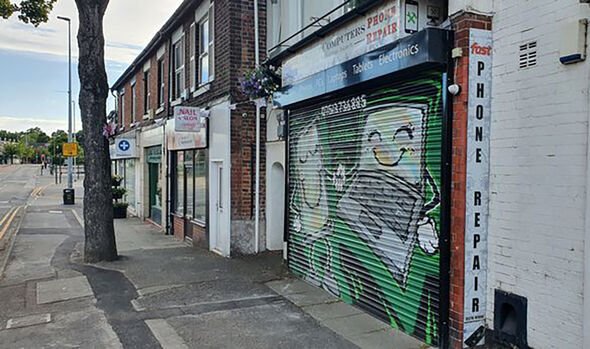 Now the father-of-three wants the local authority to change its stance as he says other nearby businesses have advertisements in their windows and every customer he has spoken to says they love the design.

He says it would “be crushing his son’s dreams” of becoming an artist if they had to remove it.

Richard said: “They came in on Wednesday and said there had been a complaint about the shutters and they were trying to gain some information.

“I said we’d had our son’s artwork painted on the shutters by a local artist and they said they would go back to the council.

“The very next day we got this letter saying the art was considered to be an advertisement, when it’s just a painting and it’s on our own shop.

“We own the building, it’s not like we’re renting and there’s shops all down the street that have things in their windows.

“If it was somewhere else or if it was offensive I’d understand, but it’s just a nice picture.

“If they’re saying having our name and phone number on it as advertising, then we’ll happily take that out.

“There’s also graffiti style artwork 200 metres away at the skate park. I just feel like we’re being singled out for it.

“There’s other shops in this street with smashed windows like the pharmacy, whereas this is a beautifully decorated shutter. That’s not allowed, but smashed windows, broken signs and empty shops are?”

Richard says himself and his family were left “gutted” when they received the letter.

He says customers have taken it upon themselves to contact the council giving their support for the artwork.

Richard said: “We were gutted when we got the letter, our whole family is gutted. I’ve written to the council and asked them to explain because I think it’s madness.

“We’ve had a crazy amount of messages off people saying how much they like the art. We haven’t had one negative comment from customers.

“We’re a really small company, we can’t compete with Argos or Currys and we’re just trying to keep the high street alive.

“This end of town is quite grey and boring and we just wanted the shop to look nice, fresh and youthful.

“We thought the security shutter was rather boring and we wanted to bring life back to this end of town and brighten the high street up.

“We thought what about a lovely big piece of artwork and that’s what we did.

“It was designed by our nine-year-old son Alex. He’s taken it in his stride, he loves that people have been complimenting him on his artwork.

“If we had to get rid of it he would be disappointed. He wants to be an artist when he’s older, so for him it would be crushing his dreams.

“It’s been lovely getting everyone’s comments, our whole family are really appreciative.

“People have just taken it on themselves to contact the planning officer and stick up for us.”

A Cheshire East Council spokesman said: “As a result of a complaint, a council planning enforcement officer visited the premises and inspected the artwork signage, which constitutes an advertisement. This requires the benefit of consent to display an advertisement.

“This has been brought to the attention of the proprietor and advice given as to the various options open to them.

“These include the submission of a retrospective application for advertisement consent, removal of the artwork altogether, or possible enforcement action should they choose neither of these options. The business has been given 28 days in which to respond.”