King Charles is leading the Royal Family in a poignant procession behind his mother’s coffin as it makes its way to St Giles’ Cathedral in Edinburgh.

Mourners have bowed their heads in silence as the Queen’s lead-lined English oak casket – made for the late monarch 30 years ago – slowly moves along the Royal Mile.

Prince Andrew is among the group, alongside his brother Prince Edward. Princess Anne is also walking behind the hearse.

Thousands of people have lined the streets along the procession route from Holyroodhouse Palace, where the coffin stayed overnight in the Throne Room.

The sun is shining in Edinburgh as flags, Union Jacks and Scottish saltires among them, can be pictured among the crowds.

The Queen’s coffin departed from Holyrood Palace before slowly moving up the historic Royal Mile, past the Scottish Parliament and in the direction of Edinburgh Castle.

A detachment from the King’s Bodyguard in Scotland and Royal Company of Archers is also accompanying the group.

The Crown of Scotland will be placed on the coffin and the Queen’s body will lie in state at the cathedral until Tuesday afternoon, allowing the public to pay their last respects. 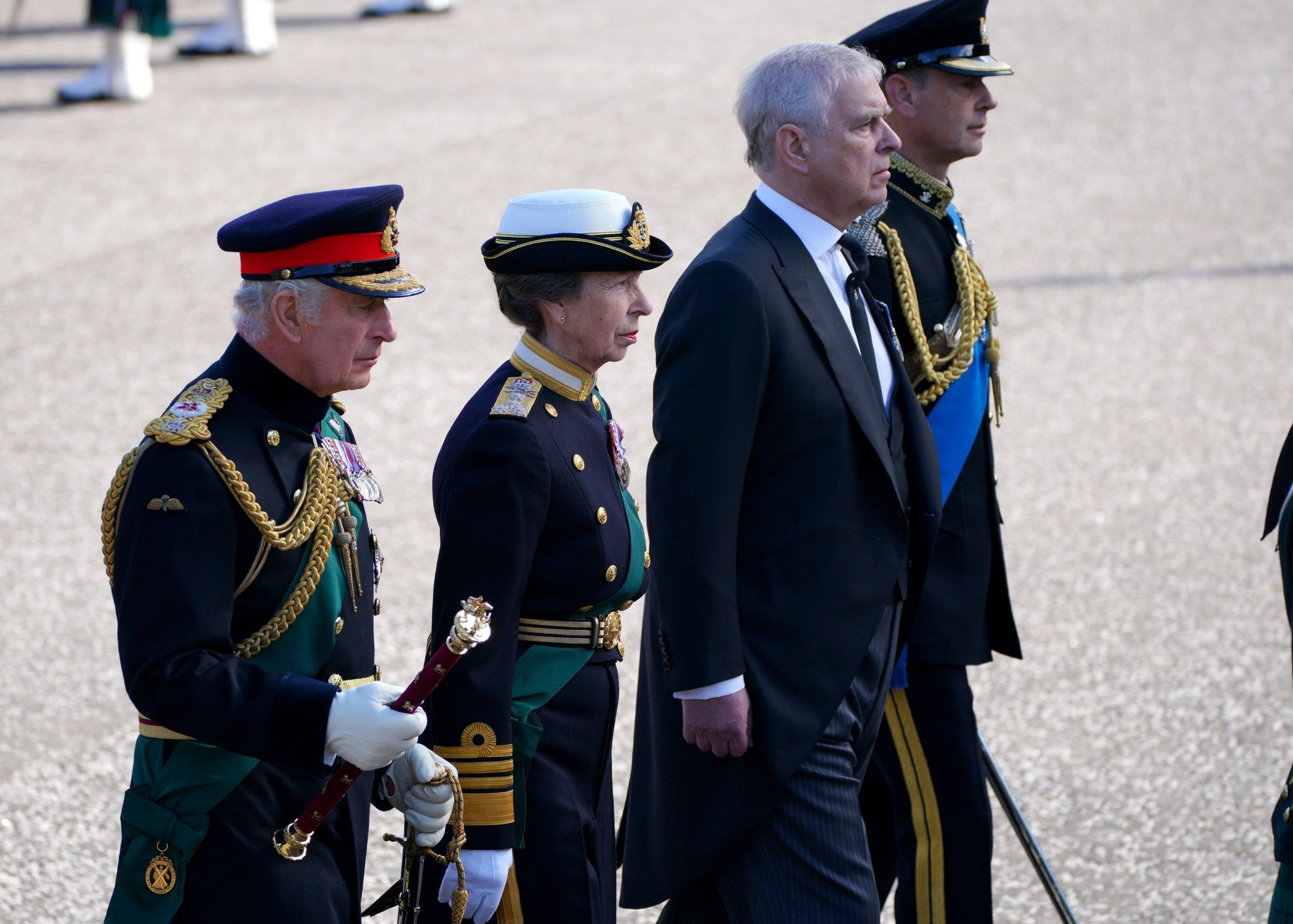 Armed police and security services have formed rings of steel on the Royal Mile, with around 10,000 officers preparing for the biggest single security operation ever seen in Scotland.

After yesterday’s monumental journey from Balmoral, today less than a mile lies between Holyrood at St Giles’ Cathedral.

At around 2.55pm, the Queen’s casket will be carried into St Giles’ where the Duke of Hamilton and Brandon will place the Crown of Scotland on top.

A service will be conducted by Reverend Calum Macleod, the minister of St Giles’, with a congregation to include ‘all areas’ of Scottish society.

Charles and the Royal Family will celebrate the Queen’s life and her connection to Scotland during the service.

The Queen’s coffin will lie at rest for 24 hours at St Giles’ amid continuous vigils, which will include one at 7.20pm by the King and senior royals standing guard at the casket’s four corners.

Mum-of-two Caroline Jolly, who has taken her son, Ryan, 13, and daughter Neve, 5, out of school so they can pay their respects in Edinburgh today.

She said: ‘I felt compelled to come and be here. We’re only an hour away so I told the kids we’re going.

‘I want them to remembering this event and to be able to tell their children that they were here to pay their respects to the Queen.’

The Queen’s coffin will travel to London tomorrow, where she will lie in state in Westminster Hall from Wednesday until her funeral on Monday.

Charles earlier addressed MPs and Lords in the Houses of Parliament before flying to Scotland with Camilla.

The King and Queen Consort were welcomed on the tarmac by First Minister Nicola Sturgeon, who appeared to have a heartfelt conversation with the new monarch.