A King’s Guard has been filmed making a little girl cry by shouting at her to get out of his way.

The Titok video shows the little girl standing alone as the soldier comes up from behind her carrying a sword.

She runs away crying after the guard shouts ‘stand clear’.

His firm reaction caused some to say he should have been kinder, asking if the soldier ‘needed to scare the little one llike that?’

One person said: ‘They still think its Game of Thrones.’

Others were quick to defend the solider, arguing that he was ‘just doing his job’. 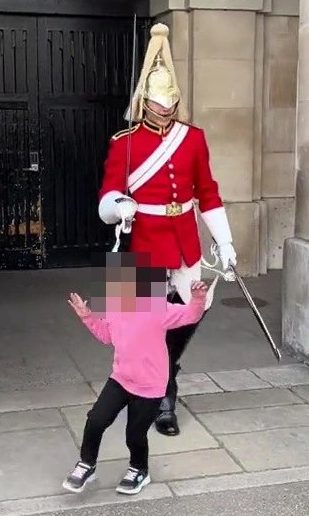 A commenter argued: ‘These guys are not a public attraction, they are there to carry out a duty.’

The Guard’s job involves walking in a line, even if it means pushing people out of their way.

They are fully-operational soldiers and can be found watching over Windsor Castle, Buckingham Palace, St James’s Palace and the Tower of London.

In 2018, a tourist who climbed over a rope barrier at Windsor Castle was jolted out of the way by a marching soldier in full ceremonial dress.

This summer, a clip of a member of the Queen’s Life Guard went viral after he shouted a tourist for grabbing hold of his horse’s reigns for a photograph.