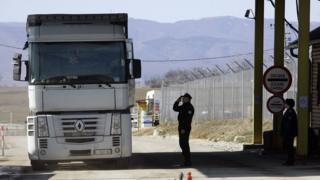 Kosovo seceded from Serbia in 2008 but is not recognised by Belgrade.

But both are part of the Cefta Balkan free-trade area.

How did the trade row start?

Tensions between the two neighbours spilled over on 6 November, when Kosovo imposed an additional 10% customs tariff on Serbia and Bosnia-Herzegovina, for conducting an “aggressive campaign”.

Kosovo was angered by the decision of a succession of small states to reverse their recognition of its independence, and accused Belgrade of orchestrating the moves.

More than 110 nations do recognise the majority-Albanian republic, but Russia and some EU member states including Spain and Greece do not.

After Interpol’s general assembly rejected Kosovo’s third bid for membership in three years on Tuesday, Kosovo complained of a “fierce campaign” conducted by Serbia against the idea of normalising relations with its former province. Kosovo had spent a reported €1.2m lobbying for Interpol membership.

Serbian officials were thought to be concerned that once a part of the police organisation, Kosovo would start seeking the arrest of commanders suspected of war crimes during the 1998-99 war.

Kosovo hit back on Wednesday, hiking the tariffs to 100% for Bosnia as well as Serbia. Authorities were also told to remove some products from shelves if they did not refer to the Republic of Kosovo.

Serbia is continuing its aggressive campaign against Kosovo in the int’l stage. It is also undermining the normalisation process. To defend our vital interest, Government of Kosovo has decided today to increase the customs tariff to 100%. Further measures to be announced soon!

How significant is the row?

Kosovo imports some €400m (£350m; $450m) worth of goods from Serbia a year, so the decision to effectively bring that trade to a halt will harm both sides.

President Aleksandar Vucic convened a meeting on Wednesday of Serbia’s National Security Council to consider a response. “We will react rationally, calmly and responsibly,” he said afterwards, Serbia’s B92 website reported. He is also due to meet Kosovo Serb leaders on Thursday.

As recently as September, there was intense speculation that the two sides were considering a potential land swap to end the stalemate between them.

In her statement on Wednesday, Ms Mogherini said the Kosovo trade tariffs were a “clear violation” of the Cefta trade agreement which takes in eight other Western Balkan countries.

“The Kosovo government has to immediately revoke these decisions,” she said.

An EU official said they wanted the measures withdrawn quickly so work could continue towards normalising relations, a precondition for both sides for entering the European Union.