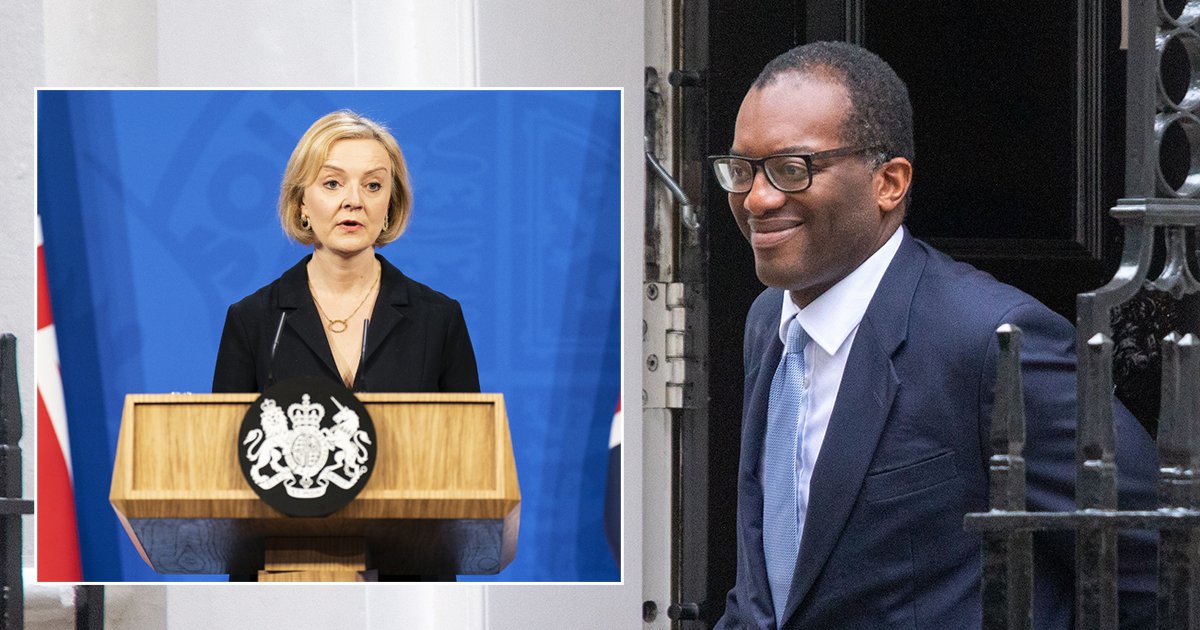 Kwasi Kwarteng believes Liz Truss is doomed as prime minister and has bought herself just ‘a few more weeks’ by sacking him and reversing key parts of his budget.

Mr Kwarteng, a close ideological ally of Ms Truss, became the second shortest-serving chancellor in history having held the position for just 38 days prior to his dismissal on Friday.

He was replaced by former foreign secretary and Rishi Sunak supporter Jeremy Hunt in an attempt to calm the markets and reverse the government’s economic plans.

Mr Hunt signalled a total change in policy direction in his first interviews this morning and signalled tax rises and cuts are on the way.

But an unnamed source close to the former chancellor thinks the decision to sack him is unlikely to be enough to save her premiership.

‘Kwasi thinks it only buys her a few more weeks,’ the Times reports, ‘His view is that the wagons are still going to circle.’

He is far from alone in sharing that view, with reports emerging that senior Downing Street officials now believe it is a matter of time before she is forced out of office.

‘Senior civil servants are now openly talking about her going’, one Whitehall source told The Times. ‘They think she’s had it.’

Next week, Tory rebels could push 1922 Committee Sir Graham Brady to change the rules and allow them to remove the PM from office, although it is unknown whether they have the numbers.

There has been rumours of talks around putting forward a ‘unity candidate’ to replace Truss, but there appears to be little agreement on who it should be.

Ms Truss has continued to defy calls for her resignation and gave an eight-minute press conference on Friday, in which she took just four questions.

She said she was ‘incredibly sorry’ to lose Kwarteng, a ‘great friend’ and someone who ‘shares my vision to set this country on the path to growth.’

But in an attempt to heal the divide in the party, she also claimed Mr Hunt, who was excluded from her cabinet, ‘shares my convictions and ambitions for our country.’

Her speech did not go down well with some Tories though, with one reportedly describing it as ‘agony’ and another ‘shockingly bad’.

One former minister told The Independent: ‘She made Theresa May look like Barack Obama. She can’t communicate. She’s just not up to it.’

Another said: ‘She looked like she had been dragged there like a reluctant child being forced to explain itself. There was no contrition.’

According to a new snap poll by YouGov, over half of Britons (49%) think the Prime Minster was right to sack Kwasi Kwarteng.

That includes just over half of those who voted for the Conservatives at the 2019 general election and just 16% of Brits say that they decision was the wrong one.

Meanwhile, two in five people (39%) think that Mr Hunt will do a bad job as Chancellor, with just 14% expecting him to do well.