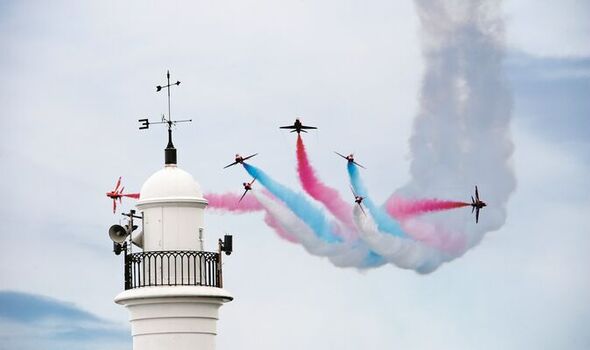 The Sunderland International Airshow has thrilled massive crowds for more than three decades with death-defying stunts taking place above Roker and Seaburn seafronts. The event usually takes place over three days on the final weekend in July and the spectacle has attracted more than two million spectators since its launch in 1989.

But the festival has been cancelled indefinitely as council chiefs want to make the city carbon neutral by 2040.

The airshow usually features a large number of planes, including the Red Arrows and the Eurofighter Typhoon. But in addition to these, the bonanza provides a boost to the local economy with the seafront packed with food counters, stalls and fairground games.

The Royal Navy traditionally has a warship off the coast and the finale is a giant firework display.

The pandemic has put paid to the airshow for the past three years – but Labour-run Sunderland city council has now confirmed it has “no plans” to hold the airshow again.

Opponents have slammed the decision and say it is a blow to one of the city’s most popular occasions.

Plans are being drafted for next year with the council promising the Armed Forces will be involved in a gala planned for Seaburn.

Council leader Graeme Miller claimed locals have stated they want to see new and different events, ones they themselves can get involved in.

He said: “Residents have identified the environment as a top concern. The council and city have committed to tackling the global climate emergency by reducing emissions.

“This makes it all the harder to justify events such as the airshow, which generate large amounts of carbon.”

“We are offered another excuse for the airshow’s cancellation – again we have been presented with ambiguity and uncertainty because the council is not properly organised.”