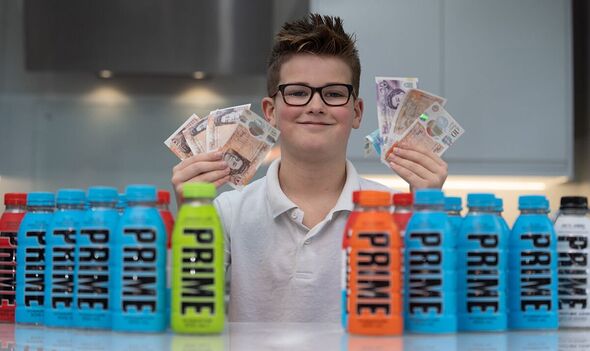 A thrifty 10-year-old boy has been dubbed a “little Del Boy” for re-selling empty bottles of the popular Prime Hydration energy drink.

Charlie Smith has made a tasty profit after braving huge queues outside supermarkets to nab bottles of the highly-coveted beverage.

Punters have been desperate to get their hands on the product, which went viral two weeks ago after Aldi put it on sale. It is popular with young people after endorsement from YouTubers KSI and Logan Paul.

Charlie guzzled the contents and turned the empties into reddies by flogging them on his mum’s eBay account – leading to an increase in his investment.

The youngster’s first sale netted him £12 for five empty bottles of Prime, which normally retail at £1.99 in most supermarkets.

And following this success, he’s even started paying mates £1 for their empty bottles in the hope of pocketing a better margin on the open market.

His ploy has even baffled dad Adam, 38, who called it “just ridiculous”.

Charlie, who is making a 17 per cent profit margin, said: “I love it, I love making money. I want to be a businessman when I’m older.”

Adam, a property developer from Nottingham, said: “Charlie’s a bit like a little Del Boy. He got above the retail price of what they sell for a full bottle, which is ridiculous.

“Now he’s trying to buy them off other people empty for £1 to try and re-sell them.

“He’s got about 25 in his bedroom now. He’s been going through eBay but he was going to try and do Facebook Marketplace as well because there are other things there.

“He saves up his pocket money – and this is the main project he’s decided to do as he’s got older as everyone is just obsessed with it.

“The fact that you can sell empty bottles of a drink is just ridiculous.

“I was laughing about it because he said, ‘I wonder if there are any other empty bottles of products that we could buy and sell?’ I said, ‘Absolutely not – this is a one-off.’

Aldi shoppers 'climb over each other' to secure viral Prime drink

Charlie began hunting for the energy drink in the lead-up to Christmas.

He used an app on his smartphone to find out where and when they would be in stock in supermarkets, which allowed him to snag a collection of flavours of the beverage, which contains water, vitamins and minerals and has no added sugar.

“I’ll be honest, we think it’s stupid that he’s buying drinks that they’re obsessed with for £2. But we can’t argue with him because he’s getting his money back on it,” Adam continued.

“But it’s very normal for Charlie. He’s very good with his money, he doesn’t like spending it, put it that way, so he just thinks it’s brilliant that he can drink it for free.

“He likes trying to buy and sell anything to make a profit.

“I asked Charlie, and he said it’s just like having a little bit of a trophy. I think it’s stupid – but it’s just to say that you’ve had it.

“All the kids at his football, everybody has just been saying, “Which flavours have you tried?” I think it’s just madness. Me and his mum find it quite comical. It’s just daft.”