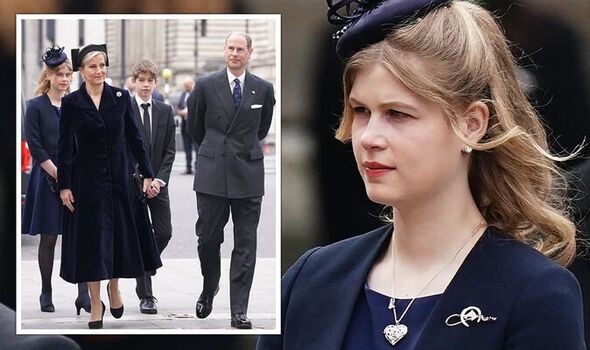 Louise, the Queen and Prince Philip’s youngest granddaughter, stepped out alongside her brother James, Viscount Severn, and parents for the poignant event. The 18-year-old looked sombre as she arrived at Westminster Abbey alongside her mother Sophie, Countess of Wessex, and Prince Edward.

The Duke of Edinburgh died aged 99 on April 9 last year.

The teenager was among the 30 people allowed to attend the socially-distanced funeral service at St George’s Chapel, during the third national lockdown.

During the programme, which marked the young royal’s first-ever interview, Louise recalled her shared love with Philip for carriage driving.

She said: “The Duke of Edinburgh has been so involved in my driving which has been so lovely, although slightly scary because he invented the sport pretty much.

“It’s incredible to have learned first-hand from him.”

The teenager also described how the Duke’s eyes would “light up” whenever they were discussing how her competitions had gone.

She said: “After a competition, he would always ask how it went.

“His eyes would light up because he just gets so excited when he talks about it.

“When we would go carriage driving, he would take me on a different route every day, I do not know how he managed to do that, and tell me all sorts of anecdotes about anything and everything.

“He is honestly one of the most interesting people I have ever met.”

Lady Louise also said she hoped to have honoured Prince Philip by taking part in the Duke of Edinburgh Awards scheme, which the Queen’s husband launched in 1956.

The service of thanksgiving has also been attended by all the children of the Queen and Prince Philip as well as some of the German relatives of the late Duke.

Government officials, representatives from the overseas realms and the Commonwealth were also in attendance.

Moreover, hundreds of representatives of the patronages and organisations Philip championed through his life of service paid their tribute during the 40-minute long service.