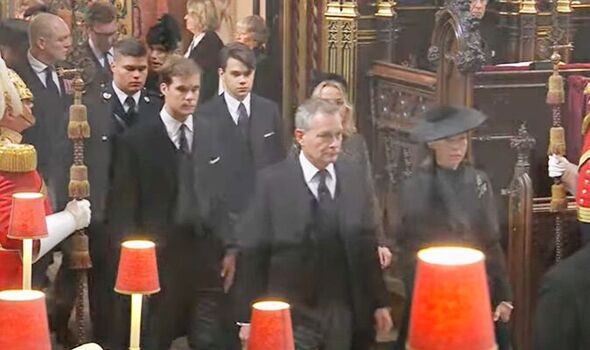 Lady Sarah Chatto donned a traditional veil as she attended the late sovereign’s state funeral. The Queen’s coffin was taken by pallbearers from Westminster Hall, where it had been lying in state since Wednesday evening.

The late monarch’s coffin was transferred to the Royal Navy’s state gun carriage, leading a procession including King Charles III to Westminster Abbey.

The Queen’s niece was joined by her 23-year-old son, Arthur, for the service at Westminster led by the Dean of Westminster, the Archbishop of Canterbury and the Prime Minister, Liz Truss.

Arthur has an elder brother, Samuel, 26, who is the first child of Lady Sarah and her husband, Daniel Chatto.

Lady Sarah was previously spotted at the Westminster Hall service on Wednesday.

She was also joined at the emotional service following the coffin procession by her brother, the Earl of Snowdon, and her son, Arthur.

Lady Sarah was originally seventh in line to the throne, but now stands at 27th.

She is the godmother to both Prince Harry and Lady Louise Windsor, the eldest child of Prince Edward and Sophie, Countess of Wessex.

Lady Sarah grew up firmly in the royal fold, spending much of her childhood at Kensington Palace, Tatler reports.