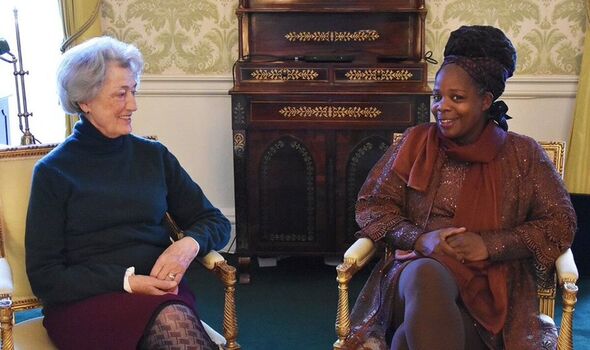 Lady Susan Hussey has met with charity boss Ngozi Fulani and apologised for repeatedly asking “What part of Africa are you from?” during a Buckingham Palace event last month. Buckingham Palace said the pair met today (December 16).

Buckingham Palace said in a statement that the founder of Sistah Space, met Lady Susan at the Palace.

The statement added: “At this meeting, filled with warmth and understanding, Lady Susan offered her sincere apologies for the comments that were made and the distress they caused to Ms Fulani.

“Lady Susan has pledged to deepen her awareness of the sensitivities involved and is grateful for the opportunity to learn more about the issues in this area.

“Ms Fulani, who has unfairly received the most appalling torrent of abuse on social media and elsewhere, has accepted this apology and appreciates that no malice was intended.”

The late Queen’s lady in waiting resigned after making “unacceptable and deeply regrettable comments” to Ms Fulani at Camilla, the Queen Consort’s, reception on violence against women.

Lady Susan served Elizabeth II for more than 60 years and is a godmother to the Prince of Wales.

Ms Fulani had detailed the conversation on Twitter, describing it as a “violation”, adding the experience would never leave her.

The charity chief executive said she was challenged when she said her organisation was based in Hackney.

She reported Lady Susan as saying: “No, what part of Africa are YOU from?”

READ ABOUT A ‘BIG CAT’ SIGHTING IN CORNWALL

Ms Fulani detailed the encounter, which happened 10 minutes after she arrived in the Palace’s Picture Gallery, on social media.

She tweeted her version of the exchange, writing: “‘Where are you from?'” “Me: ‘Here, UK’. ‘No, but what nationality are you?’ Me: ‘I am born here and am British.’ ‘No, but where do you really come from, where do your people come from?’ Me: “My people”, lady, what is this?’

“‘Oh, I can see I am going to have a challenge getting you to say where you’re from.”‘

Ms Fulani, who founded Sistah Space in 2015 to provide specialist support for African and Caribbean heritage women affected by abuse, wrote at the time: “Mixed feelings about yesterday’s visit to Buckingham Palace. 10 mins after arriving, a member of staff, Lady SH, approached me, moved my hair to see my name badge. The conversation below took place. The rest of the event is a blur.”

Buckingham Palace described the comments as “unacceptable and deeply regrettable”. Royal aides then invited Ms Fulani to discuss “all elements of her experience” in person.

Lady Susan expressed her “profound apologies” for the “hurt caused” and stepped aside from her honorary role with immediate effect.

In a statement issued in late November the Palace said all members of the Household were being reminded of diversity and inclusivity policies.

The matter raised serious concerns at the Palace, where an unnamed royal was accused of racism by Meghan, Duchess of Sussex, against her then-unborn son Archie.

Meghan, the first mixed race person to marry a senior royal for centuries, said during an interview with US talkshow host Oprah Winfrey that a royal – not the Queen nor the Duke of Edinburgh – expressed concerns with Harry about how dark Archie’s skin tone might be before he was born.

The Queen issued a statement saying the issues raised would be dealt with privately as a family, but that “some recollections may vary”.

This latest incident led to accusations of “institutional racism” against the Palace and overshadowed the first day of William and Kate’s visit to the US for the prince’s Earthshot Prize award ceremony.

William is understood to have agreed it was right for Lady Susan to step down from her role. A Kensington Palace spokesman told reporters in the US ahead of the Waleses’ three-day trip to Boston that racism has no place in our society.

Speaking about Lady Susan, the spokesman added: “The comments were unacceptable and it is right that the individual has stepped aside with immediate effect.”