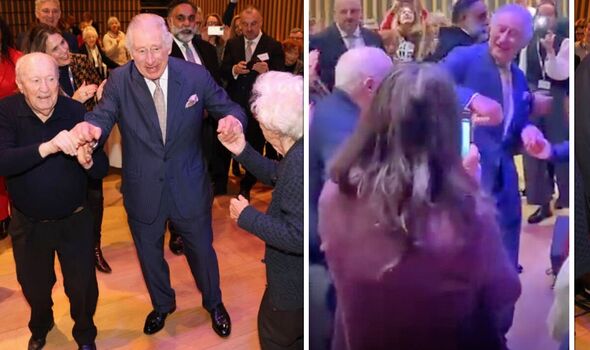 King Charles appears unfazed as he’s snapped dancing away at a Jewish community centre today. The monarch visited the centre that is open to all faiths this afternoon and was filmed dancing with members of the public. The community centre acts as a hub for art, culture, social action and learning in North London. He was seen clapping along to the music and dancing with people at the centre.

The monarch has continued his duties despite the explosive documentary that concluded on Netflix on Thursday.

He was seen dancing joyously to the Hora with members of the Jewish community, holding the hands of two pensioners and dancing in a circle to whoops and cheers.

Charles also looked delighted when a crowd gathered to chant his name outside. The King waved furiously and grinned at the well-wishers.

It came after crowds turned out at Westminster Abbey to cheer William and Kate last night, shouting: “We love you”.

Some have suggested that the monarch has vowed not to watch the documentary, which saw a number of claims made against Prince William.

Last night, the Prince and Princess of Wales were also seen putting the documentary behind them as they stepped out for the Christmas Carol service at Westminster Abbey.

There were audible cheers from members of the public who shouted “Kate, we love you” and “Prince William, we love you” as they stood in the cold to greet the future king and queen.