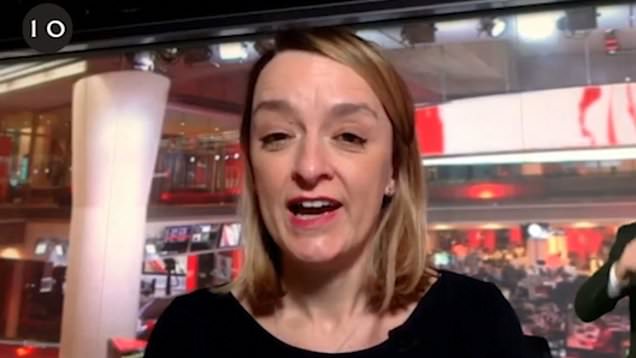 Laura Kuenssberg could be heard sighing and saying ‘He didn’t answer the question’ after she asked the prime minister whether people could think about booking summer holidays.

In response, Boris Johnson had only said that it was illegal to go on holiday, and that he might be able to give more information from February 22.

She had asked him during a press briefing: ‘Should members of the public be booking summer holidays or not, whether at home or abroad, because the Transport Secretary this morning warned people about booking anything at all.’

Boris Johnson replied: ‘As everybody knows, it’s currently illegal to go on holiday. That’s the state of play at the moment. We are looking at the data every day.

‘On Monday, we’ll be able to say a little bit more about where we are in terms of the JCVI one to four group and where the data is then.

‘And the week of the 22nd, as I said, we’ll be setting out the roadmap.That is the best I can give. There’s not an awful long delay between now and the 22nd but I hope that we’ll be able to give some more clarity to people then.’

Sir Patrick Vallance responded: ‘In terms of the variants, we’re seeing some of the same things in variants popping up all over the world.

‘And that’s what you’d expect, there are some variants the virus likes to have because it gives it some sort of advantage.

‘And the advantages that variants may give include increased transmissibility or increased severity, and potentially for some, immune differences which means the body recognises it differently from an old variant. Those are the three things that one worries about.’

As the video moved onto the next question, Ms Kuenssberg could be heard groaning and saying: ‘He didn’t answer the question, euuughhh.’

The clip was spotted by viewers, some of whom said she was ‘speaking for the nation’ with her remark.