Welsh Liberal Democrat leader Jane Dodds said reported plans to “gut” army manpower from 74,000 to 55,000 would “diminish” the UK’s “standing on the world stage” and “jeopardise” Britain’s place in NATO. Ms Dodds accused the Prime Minister of “planning huge cuts in the shadows” after The Sunday Times published a report at the weekend.

Security and defence bosses are said to be considering scrapping RAF air bases and a fleet of Hercules planes and Puma helicopters in a bid to save cash, according to the article.

Ms Dodds said: “If these reports are true, then the Conservatives have a lot to answer for.

“Just 8 months ago they were promising to protect our armed forces, now they are planning to gut them. 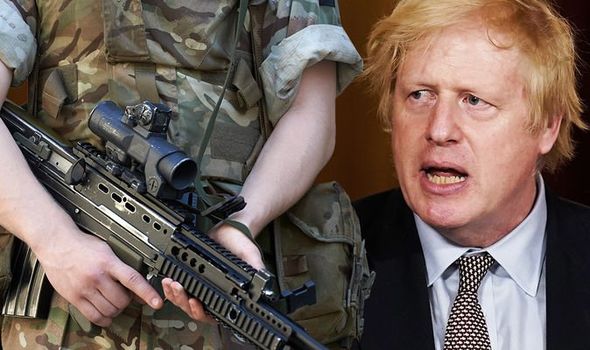 “Cuts of this scale would cripple the ability of our armed forces to respond to situations, diminish our standing on the world stage and potentially jeopardise our place in NATO.

“These cuts would also affect barracks towns, such as Brecon and Cawdor.

“These barracks form a key part of the local economy and community, a position any cut would massively jeopardise.

“The Conservatives must come clean about their planned cuts and be upfront with people. They cannot proclaim to be the party protecting our armed forces while simultaneously planning huge cuts in the shadows.

“I will be writing to the Secretary of State for Defence to press this issue and demand answers.”

Fury over the reports erupted on Twitter, with one writing: “The future of our armed forces, cannot rest in the hands of an unelected bureaucrat.

“The Royal Marines are world class troops and are best placed to protect British Interests.”

Another said: “Wasn’t it only a month of so ago the Army were doing an amazing job of building the hospital in record time as well as manning swab stations? So this is how they plan to thank the armed forces.”

Mr Johnson is understood to have hired King’s College London historian, John Bew, to conduct the review from Number 10.

Money saved will be pumped into cyberwarfare, space and artificial intelligence.

But Lord West of Spithead, a former First Sea Lord and security advisor to Downing Street, said this was not “the way to win a war”

He told the Daily Telegraph: “The Treasury always think of cyber and AI and space as a nice cheap way of doing things,” he said.

“I don’t think this is necessarily the way to win a war. In the final analysis, wars end up killing people and you need kinetic killing capability.

“I’m quite happy to face someone down in a field if I’ve got a machine gun and he’s got a laptop.

“It all sounds wonderful but you still need that kinetic capability.”

A Number 10 spokesman said: “It is false to say No 10 plans to cut defence.

“We will fulfil our manifesto commitments, including to increase the defence budget above inflation. We do not recognise the accounts of the alleged meetings.”